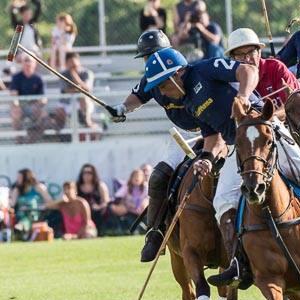 The veterans of Newport took on the up-and-coming players for Lufthansa on Saturday, June 14th in the annual Lufthansa Cup, a classic 6-chukker match in the Newport International Polo Series, Presented by your Rhode Island BMW Centers. Skill and experience was matched with the speed and agility of youth as each team fought to take home the cup.

Wisdom gave Newport an advantage for most of the match as the team lead through the fifth chukker. In the opening chukker, Souto was the first to score, putting Lufthansa briefly in the lead. D'Angelis quickly answered forNewport with a goal of his own. Keating won another goal for Lufthansa, butStill scored two more for a three to two lead ending the chukker. Lufthansa came back to lead the second chukker with two more goals until D'Angelis scored three-in-a-row. Keating attempted to regain ground with another goal to open the third chukker, but it was immediately matched by D'Angelis. Souto came back to score for Lufthansa leaving Newport leading by only one goal at half-time.

The one goal spread was maintained through the fourth chukker as Keating won two goals for Lufthansa, matched by Friedman, and C. Still for Newport.D'Angelis widened the gap at the beginning of the fifth chukker, but Shore, andSouto evened up the score with a goal each. Still drove home another goal for a score of 10 Lufthansa, 11 Newport as the teams entered the final chukker. The youth of Lufthansa caught a second wind as Shore, and Souto scored five goals between them to Newport's two by S. Still, and Friedman. The game was clinched in the final seconds as Shore burst into the lead and split the posts, ending the match in a 15 to 13 win for Lufthansa.

Experience the ultimate in travel when flying with any of the Lufthansa Group Carriers – Lufthansa, Austrian, Brussels and SWISS International Air Lines. These four carriers not only offer unparalleled service and comfort but also provide 16 flights a day from the Northeast US to Europe and the rest of the world. We look forward to welcoming you on board very soon, and we hope you enjoyed the match!

A spectator from Whitestone NY left with this week's door prize, a sumptous massage from Massage Envy. Best Tailgate was awarded during the match to the guests in space 51 who recieved gifts from our friends at Hangar 1 Vodka and the International Tennis Hall of Fame. The 2-hour match concluded with the Veuve Clicquot Champagne Toast & Trophy presentation, autograph signing, and cocktail hour to mingle with the players.