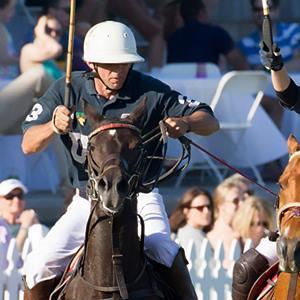 It was an outstanding opening day as Sweden made a grand debut in the NBC-10 Newport International Polo Series XXIII, Presented by BMW onSaturday June 7th. Though Newport pulled ahead just before half-time, the Swedish team held Newport at two hard fought goals for a final score of 9 to 7.

“Unrelenting defense from both teams kept the score low and reflects how evenly matched the two teams were,” commented USA team captain Dan Keating at the post match trophy presentaiton.

The first chukker ended in a two all tie with goals scored by Friedman and M. Keating for USA, answered by Folcker and Still for Sweden. During the second chukker, each team posted one goal, raising the score to three all. In a burst of agility, USA pulled ahead by three goals at the end of the third chukker for a half-time score of USA 6, Sweden 3.

Sweden regrouped at half-time and was out to even the score int the fourth chukker. Folcker and Willén drove home one goal each, while Friedman only snuck one goal past Sweden's defense. Sweden continued to close the gap in the fifth chukker. Wilken and Still won two more goals while Friedman again picked up a goal for USA. With only one goal between them (USA 8, Sweden 7), the teams took to the field for the final chukker. Both teams battled it out for the last seven minutes. In the end, team captain D. Keating pushed through the final goal for a USA victory in the season opener.

Off the field, the Swedish team enjoyed famed hospitality and lodging, courtesy of Vanderbilt International Properties, a boutique real estate firm specializing in luxury waterfront properties in the Newport/Bristol area, and the most luxurious & unique properties around the world.

One lucky spectator was awarded the weekly door prize from Massage Envy. Our tailgate judged handed out the Best Tailgate prize, sponsored by our friends at Hangar 1 Vodka and the International Tennis Hall of Fame. The 2-hour match concluded with the Veuve Clicquot Champagne Toast & Trophy Presentation of the inaugural USA vs. Sweden silver perpetual cup, naming of the Best Playing Pony, autograph signing and cocktail hour to mingle with the players.

During their visit, the Swedish team also enjoyed America's Cup Charter sailing, paddle boarding - courtesy of Island Surf & Skate, tennis at the International Tennis Hall of Fame, helicopter tours with Birds Eye View Helicoptour Tours, Newport mansion tours and a team dinner at the one and only Clarke Cooke House for a truly memorable visit to the City by the Sea.