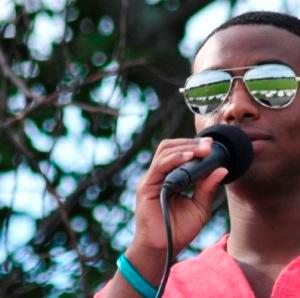 Star Kid, Rasaanh Matra opened Saturday's match with a live rendition of the star-spangled banner for the large, cheering audience on hand June 9th for the Newport Cup at the Newport International Polo Series, Presented by your Rhode Island BMW Centers.

Star Kids Scholarship Foundation is the beneficiary of this year's Braveheart Ball, the annual black tie charity gala hosted by the Newport Polo Club on Friday, Aug. 3 in Rosecliff mansion.  An early-bird discount is being offered through this Frid, June 15 online only.   The gala will fete guests of honor, the Scottish Polo Team.

Saturday's beautiful summer weather was the perfect backdrop for Newport's come-from-behind victory.  Playing for Newport was Stephanie Still in the #1 position, Michel Nseir at #2, Charlie Bullis at #3 and Dave Bullis at #4.  The roster for Far Reach, the challenger from Cape Cod, included Julie DeAngelis at #1, Bridget Torrey at #2, Jim DeAngelis at #3 and Peter Friedman at #4.

Far Reach took an early lead in the opening chukker, with points by Julie DeAngelis and Torrey (2), but Newport sparked to life with a point by Nseir to trail 3-1.  Scoring went back and forth in the 2nd period, starting with Newport'sStill, then Friedman for Far Reach, and ending with D.Bullis's goal to narrow the deficit to 4-3.    In the 3rd chukker, C.Bullis tied the score, Jim DeAngelis took the lead back but D.Bullis tied it up again to end the first half, 5-5.   Now neck and neck, both teams fought hard in the 4th chukker; Torrey put Far Reach ahead again but D.Bullis tied the score again at 6-6.  Newport launched a 3-goal attack in the 5th by D.Bullis (2) and C.Bullis, while Far Reach could only produce a single point by Jim DeAngelis, for a 9-7 advantage for Newport.  Far Reach had 2 penalty conversions in the final period but a field goal by C.Bullis ensured the 10-9 Newport win.

The silver Newport Cup revere bowl was awarded to the winning team after the match in the champagne trophy presentation by Champagne Nicolas Feuillatte.  A middletown resident won the weekly door prize drawing.