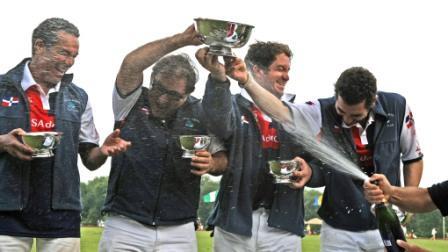 The Newport International Polo Series opened its 19th season on Saturday, June 5th at 5pm featuring USA playing against first-time challengers from the Dominican Republic, making its debut appearance in the Polo Series at the polo grounds of historic Glen Farm on the outskirts of Newport.

“We are excited to start the season with a great competitor like the Dominican Republic in our international lineup this year, along with Scotland, Netherlands, Ireland, Australia, Jamaica, and England,” explained Dan Keating, USA team captain and founder of the Polo Series.  '

After a torrential downpour in the early morning hours, the match was status questionable but without further rain for the remainder of the day, the field proved stable for the 5pm throw-in.  The footing was deep as each team earned a point in the opening period, with goals by River for the DR and Bullis for USA, at 1-1.  USA was scoreless in the second chukker as the DR took the lead with a goal by Perez-Diez, 2-1.  Rivera and Torrey contributed to their respective tallies with a goal each, for a 3-2 DR lead at halftime.

USA came out swinging in the 4th chukker with 3 goals by Friedman, Bullis and Torrey, while the DR managed a single goal by Rivera, ending the period in favor of the home team, 5-4.  A quick recovery by the DR with goals by Bonetti and Perez-Diez reclaimed the lead, 6-5.  In the final period, the score was tied, then the lead changed and tied again, with USA goals by Friedman (2) and Keating, and DR goals by Perez-Diez and Rivera, for a suspenseful 8-8 tie at the buzzer.  A penalty shootout in overtime determined the winner, with 2 more points for a 10-8 Dominican Republic victory.

An exciting door prize of a season pass to Tanglewood, the summer of the Boston Symphony Orchestra was  awarded during the match, courtesy of WCRI classical radio RI.  A trophy presentation followed the match, with the presentation of the inaugural USA vs. Dominican Republic silver revere bowl. The Best Playing Pony blanket was bestowed on Bolga, selected by the visiting team as the standout in their victory (loaned by Kathleen Reagan).

Dating back more than 130 years, the polo matches are a unique and popular Newport summertime tradition enjoyed by the public.  Tickets are sold at the entry gates two hours prior to the start of each match.  General Admission for lawn or bleacher seating and tailgate picnics is $10.00 for adults; children 15 & under are free.  Box seating in the Subscribers Enclosure & grandstand is also available for $15/person. For season tickets, group reservations and more information call 401-846-0200 or visit www.nptpolo.com

Matches take place every Saturday in June – September at 5pm (4pm in September). Special events in conjunction with the matches include the Newport Polo Club’s Asado Lamb Roast on July 24th, the International Polo Ball on August 6th, the Lobsterbake on Aug. 7th, and the Jerk Grill on Aug.21st, in which the public is invited to partake. For more information on the special events, contact the Polo Office: 401-847-7090.