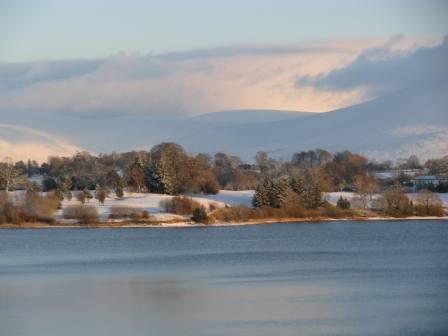 The Herbst clan greeted team USA, represented by Peter Friedman, Minnie Keating and Dan Keating & company with plenty of warm embraces and soulful Irish fare and adventure each day.  The Polo Club at Wicklow is a busy place year-round with the finest polo arena the world over, perched high atop Kilpool Hill overlooking the Irish Sea.

It's finely-tuned thoroughbred ponies and ever-present, witty cast of characters gave the Americans a run for the coveted trophy.

A snowy winter, such as hasn't been seen in over a generation, blanketed the Wicklow mountains and all the region, chilling any hopes of fox hunting, to the relief of the fox population, as well as putting the opening rounds of the tournament on ice.  A foot-mallet polo contest ensued on the golden sands of nearby Brittas Beach, foreshadowing the Irish polo prowess, followed by plenty of merry making and Guinness on tap to abate the mob.

The third and final match was rescued from the clutches of Old Man Winter, and out came Peter and the Keatings on Polo Wicklow's finest polo ponies to play a 6-chukker match against a dizzying Irish rotation of Robert Patton, Keith Robertson, Tim Bearpark, Siobhan Herbst and Mickie Herbst.  For the complete match report and action photos, go to the January calendar.

Other noteworthy Irish wonders along the way included the 6th century tower of Glendalough, the Powerscourt Manor & Gardens, the notorious Wicklow Jail, the breath-taking countryside & estates of Roundwood, the snow-covered landscapes and frozen lakes of the Wicklow Mountains, Humewood Castle - the most famous Victorian style of Ireland's hundreds of castles, and the c. 800 Celtic Book of Kells at Trinity College in Dublin.

In keeping with Irish lore, a trifecta of victories is required to claim the prize and therefore, the silver cup rests in sanctity ~ dust in tact ~ in its place on the Wicklow Polo Club's well-stocked trophy shelf.

The Irish team will visit Newport in July ’09 to avenge last season’s loss on American soil, in the Newport International Polo Series.  Many thanks to the Herbst Family, including Mickie, Wendy and Siobhan and friends for their Irish hospitality, food, drink, horses, and polo.