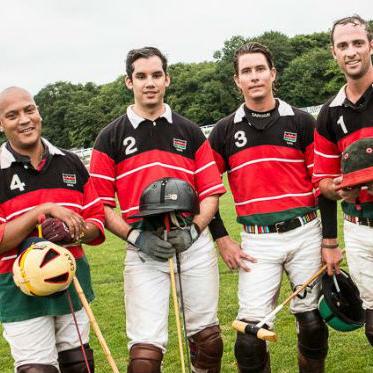 Amid ominous storm clouds and the most loyal polo fans, Kenya took to the field on Saturday, August 2 for the NBC-10 Newport International Polo Series, presented by BMW. USA brought out the heavy hitters, and ran out the victors.

Traveling half way around the world, from Kenya, Stewart Lucy, Tarquin Gross, Hansi Bruins, and Chris Foot, braved the slippery field to challenge USA. Dan Keating, Carlos Maldonado, Jim DeAngelis, and John Wigdahl shook off the raindrops to meet Kenya on the field.

USA opened the scoring as John Wigdahl unloaded a lofted shot and split the posts. Kenya's number 4, Chris Foot matched Wigdahl's cracking shot, scoring for Kenya. Tarquin Gross got in on the action to end the first chukker with another Kenyan goal. It was USA that dominated the second chukker with a goal by Carlos Maldonado, and two more from Jim DeAngelis. Several plays by Kenya lef the ball just on the goal line, only to be swept out by team USA.

Half-time came early with weather conditions permitting only a 4 chukker match. The score was 4 to 2 when the teams returned for the third chukker. USA continued to pull away as DeAngelis, Maldonado, and Keating deftly navigated the wet field to goal. Kenyan big hitter, Hansi Bruins gained some momentum with two goals before the chukker ended. USA had pulled ahead, 7 to 4, as the umpires threw the ball in for the final chukker. Keating quickly took the ball to goal for USA, but Tarquin Gross made up some lost ground with a goal for Kenya. Carlos Maldonado finished the match with a goal for USA and a final score of 9 to 5.

A lucky spectator won the perfect way to recover from a wet day at polo, taking home the door prize from Massage Envy. Rain didn't slow down the die-hard polo fans as tailgaters in spot 61 were decked out in animal print, exotic stuffed animals, and pith helmets, taking home the best tailgate prize package from Hangar 1 Vodka. After 4 periods, called chukkers, everyone gathered for the Veuve Clicquot Champagne Toast & Trophy Presentation of the USA vs. Kenya Cup inaugurated in 2011, given by Myles Murray, bakemaster for McGrath Clambakes.