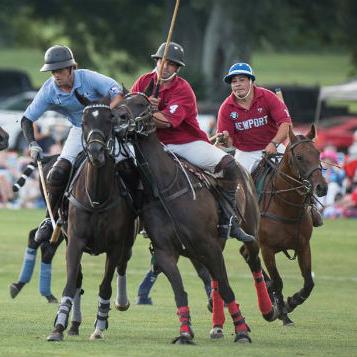 New York swept in early for the NBC-10 Newport International Polo, presnted by your Rhode Island BMW Centers. The teams were neck and neck through half-time, but New York's drive pulled the team ahead for a 14 to 10 win.

Newport was in no lounging mood as team captain, Jim DeAngelis started the match with a driving play from center field right through the New York goal. Marcos Onetta swiftly duplicated the play though, scoring for New York. Amanda Poor followed suit to end the first chukker, 2 to 1 in favor of New York. Newport briefly took the lead in the second chukker with goals from Rory Torrey and Leo Mejia, but Marcos Onetta evened up the score by the chukker's end at 3 all. The stalemate continued as goals by DeAngelis and Torrey were matched by Sarah Martin on a penalty shot, and CJ Martin, ending the first half in a 5 all tie.

New York came back with passion lit and fire burning after halftime. Onetta and Poor took New York's goal count up to 5, and strong defense kept Newport out of the goal completely. Minnie Keating ended the Newport lockout with a goal, but CJ Martin and Onetta each made another goal for a score of 6 to 10 going into the final chukker. CJ Martin continued to advance for New York, opening the sixth chukker with a goal. Jim DeAngelis took New York to task with three goals, Sarah Martin, and Amanda Poor matched DeAngelis' streak. Minnie Keating made a perfect play, taking the ball to goal from the lineup, but Sarah Martin got the last say, ending the match in a 14 to 10 win for New York.

The weekly door prize from Massage Envy went to Cambridge with its lucky winner, and a party in pink won the Best Tailgate prize package from Hangar 1 Vodka. At the Veuve Clicquot Champagne Toast & Trophy Presentation, Jim DeAngelis and Marcos Onetta were recognized as the high scorers, each with an impressive 5 goals. Mark DeStefano of Pedego Electric Bikes was joined by top secret tailgate judge, Patrick, to present the trophy to the winning team.