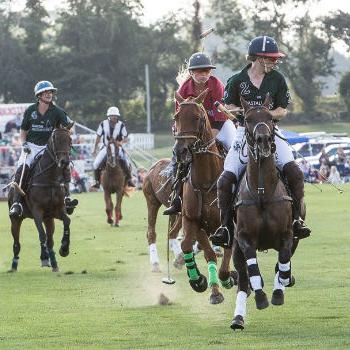 Polo fans were treated to high scoring action and a win for the home team . Playing #1 for Coastal Orthopedics was Stephanie Still; at #2, Sam Clemens; in the #3 position, Sam Shore; and playing #4, Dr. Dave Bullis. Newport fielded Amy Rice in the #1 position; Leo Mejia at #2; playing the #3 position was Heather Rasulis; and at back, Jim DeAngelis.  Umpires were Dave Markell and Dan Keating, (riding Skyfall in the second half, a 4-year old making his first appearance on the International Field.)

The flying Rasulis lit up the field to start the 1st chukker. In two neat plays, she took control of the ball in the line up and ran straight to goal for Newport. The ladies of Newport continued to play hard and fast as Rice made another perfect play, carrying the ball for another goal. Coastal Orthopedics shook off the cobb webs as Clemens brought them into the game with one goal, but the always reliable DeAngelis finished the chukker strong with another goal for Newport.

It was Rasulis again with her well practiced penalty shot that continued Newport's advance to start the 2nd chukker. Shore for Coastal Orthopedics then took off running, determined to close Newport's 5-1 lead, and brought Coastal up to 2 goals. Rasulis and DeAngelis didn't bat an eye, scoring a goal each as the chukker ended. Newport continued its unhindered advance through the 3rd chukker, as Mejia and DeAngelis widened Newport's lead again to 9-2 before halftime.

Coastal Orthopedics regrouped during halftime as the #3s and #4s for each team began a match long duel for control of the ball. Goals by Shore and Bullis were matched again by Rasulis and DeAngelis. The score was 11-4 as the teams headed into the 5th chukker.

Shore effortlessly converted a 30 yard penalty to open the chukker, but Rasulis matched him again, followed by another goal from Mejia in regular play. Shore and Bullis began hard charges to the Newport goal as the clocked ticked away the seconds they had to catch Newport. Their work paid off, scoring twice more before the clock ran out on the 5th chukker.

The 6th chukker was do or die as the captains and #4s for both teams ran the ball end to end in an attempt to make it thgouh the goal. DeAngelis was the first to score on a perfectly executed 40 yard penalty, raising Newport's score to 14. Shore came back for Coastal Orthopedics, followed by Clemens with another goal, and then Shore again. But the fervent effort wasn't enough to rein in Newport's lead they ran out the winner with a final score of 14 to 10.

It was like a party at the Ritz in spot 00, complete with gourmet buffet and cocktail tables decorated with candles in hurricane glasses, and an elegant horse portrait mounted to the flag pole. Their 5 star party was matched by a 5 star prize package from Hangar 1 Vodka and Vita Coco. This week's door prize winner also got a special treat, two tickets from the Newport Mansions to their Sunday Grand Tasting for the food and wine festival. After the match, Brooke Fairman and her daughter joined the players for the Vueve Cliquot champagne toast and trophy presentation where Newport was awarded the Revere Bowl.