The Luck of the Irish Strikes Again 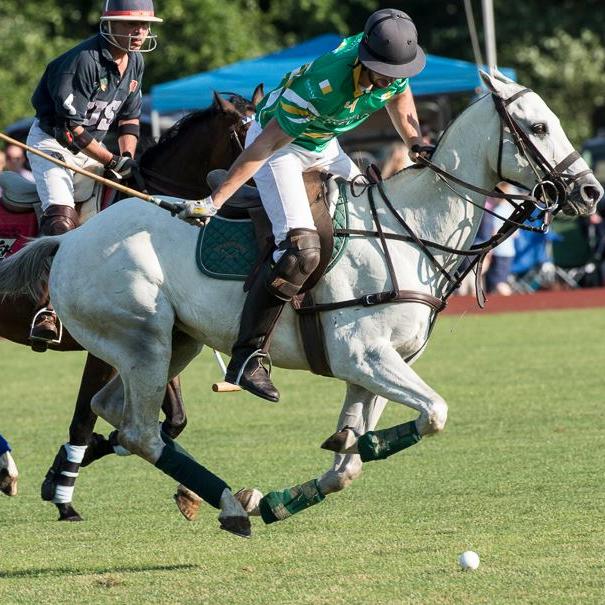 It was an ideal summer day as the Irish Polo Team made its 24th consecutive appearance on Saturday, July 11, 2015 at 5p.m., before one of the season's largest anticipated audiences at the Newport International Polo Series, presented by your Rhode Island BMW Centers.

Traveling all the way from the Wicklow Polo Club to defend their winning title against USA for the third consecutive year in a row, the Irish team brought a pocketful of Irish luck to vie for the perpetual silver cup in an intense six-chukker match that went neck and neck until the final chukker for a 14 -10 win for the visiting team.

Playing for Ireland was the top female player in Ireland, Siobhan Herbst at #2, with Caroline Keeling at #1, Colm Kelleher at #3, and Davo Stone at #4.

Representing your favorite USA team in blue was Charlie Bullis at #1, Chip Stiegler at #2, our beloved President Dan Keating at #3, and Peter Friedman at #4.

The game was off to a wicked fast start as Stone landed a point for Ireland within the first couple seconds of the match but USA responded with points by Stiegler and Keating before the end of the first chukker.  A seven-minute game delay occurred during the opening chukker when a pony ridden by one of the Irish players inadvertently stumbled, resulting in an injury to the horse.*  The injured horse was removed to Glen Farm stables by equine ambulance for immediate veterinary care; the player sustained minor injuries and resumed competition.  Defense was tight in the second period, as Bullis was able to sneak one point for USA, and Kelleher one point for Ireland. Both teams continued to play full force into the third chukker, going back to back with Kelleher scoring another two points for Ireland, and Stiegler and Bullis scoring for USA, with Bullis on a penalty shot, pushing USA ahead with a half-time score of 5 to 4.

Both teams regrouped during the break, and USA was out for the win in the fourth chukker as Stiegler scored a point for USA, followed by Bullis with another goal by penalty shot. Kelleher was able to sneak a point past USA’s defense for Ireland before the bell. The crowd saw the luck of the Irish as Keeling, Herbst (2), Kelleher, and Stone all scored a point for Ireland within the seven minutes of the fifth chukker. Bullis was able to borrow the spot light and muster one point for USA before the bell. Ireland continued their streak into the last chukker as Herbst (2) and Stone (2) both scored goals for Ireland. USA made one last push for the title as Friedman and Bullis followed the ball through the posts, but fell short as the final bell rang, and Ireland rode to claim the cup with a final score of 14 to 10.

A weekly door prize drawing of a pair of shoes from Rockport was awarded to one lucky winner, and Best Tailgate was awarded to a group in Space 24 who recieved a Tailgate Trunk from Stella Artois.

The two-hour match concluded with the Veuve Clicquot Champagne Toast & Trophy presentation of the perpetual USA vs. Ireland cup, inaugurated in 1992, from the hands of Irena Strauss from BMW, naming of the 'Best Playing Pony', a special performance by Nevin Academy of Irish Dance, and the annual Asado Lamb Roast.

During their visit, the Irish team also enjoyed America's Cup Charter sailing, helicopter tours with Bird's Eye View Helicoptour Tours, and a team dinner at the one and only Clarke Cooke House for a truly memorable visit to the City by the Sea.

* Dan Keating, President and USA Captain states: "The polo community appreciates the overwhelming outpouring of concern for the horse that was injured in yesterday’s polo match.  Injuries are a part of every sport, and we have a very low rate of equine injuries.  In this unfortunate circumstance, the horse stumbled for no apparent reason and went down, incurring an injury.  The horse received immediate veterinary care by its vet & trainers, who were present.  At the request of the family that owns the horse, we are repecting their privacy with regard to additional details."