May the Odds Be Ever in the Capital's Favor 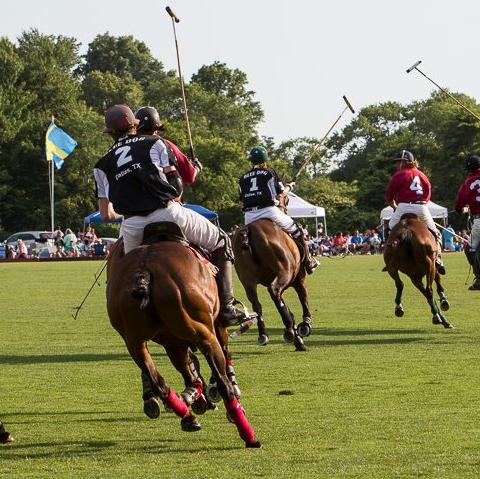 The grey clouds parted, and the sun began to shine, just as Newport took the field to face our nation’s capital Washington D.C. in their debut in the Newport International Polo Series, on Saturday, July 18, presented by your Rhode Island BMW Centers.

Both teams were neck to neck through half-time, but Washington D.C. held defense, which gave them the edge to trot away with a winning score of 14 to 11.

Representing the capital in a classic six-chukker match was Ade Adedeji in the #1 position, Lou Berrizzi in #2, Gregorio Simiones in #3, and Christophe Landon in #4.

Sporting red for the home team was Julie DeAngelis and Bridget Torrey in #1, Peter Friedman in #2, Chip Stiegler in #3, and Jim DeAngelis in #4. Club member Dave Markell and our beloved President Dan Keating were the officials.

The match was off to a steady start as Jim DeAngelis scored a point for Newport on a penalty shot. But the bar was set high as Berrizzi landed himself a hat-trick, collecting three points for Washington, and pushing his team ahead by the end of the first chukker. Both teams went into full combat as Newport began to close the gap with back-to-back goals by Stiegler, J. DeAngelis (2) and Friedman; and Simiones and Landon (2) for Washington. Washington's offense lunged into the third chukker as Berrizzi and Landon (2) scored three more points. Jim DeAngelis was there to back up Newport, scoring one point for the team, and another on a penalty shot, but fell short at the final bell, sending the teams off into a half-time score of 9 to 7.

Both teams regrouped, and were out to win the title as Stiegler and Julie DeAngelis snagged two more goals for the red team, followed with another goal by team member and husband Jim DeAngelis on a penalty shot. Adedeji and Simiones were there to fire back as they swung and pushed two more goals through the posts for Washington. The crowd saw textbook defense as Washington kept Newport completely out of the goal in the last two chukkers, allowing Adedeji and Simiones (2) to slip three more points through Newport, as the final bell rung through the summer air, and the capital trotted away with the win and final score of 14 to 11.

A weekly door prize drawing of a pair of shoes from Rockport was awarded to one lucky winner, and spot 59 won Best Tailgate and a prize Tailgate Trunk from Stella Artois.  The match concluded with the Veuve Clicquot Champagne Toast & Trophy Presentation, with prize giving by Stacie Mills, principal broker of Vanderbilt International Properties Ltd., along with autograph signing and cocktail hour to mingle with the players.