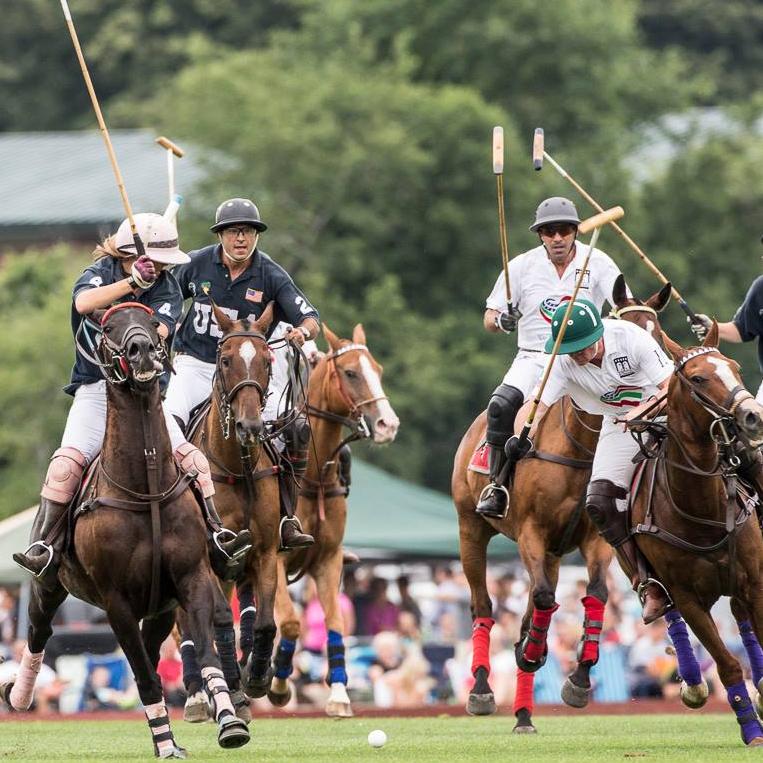 Delightful weather greeted fans that filled the Coliseum of Polo on Saturday, July 25, to watch USA go hoof-to-hoof with Italy, to defend their winning record in a six chukker match in the Newport International Polo Series, presented by your Rhode Island BMW Centers. Competing for Italy was a team from Rome, home of the oldest of Italy's 15 polo clubs, a significant footprint for the sport where only about one hundred and fifty players play year-round, even on beaches and frozen Alpine lakes in winter! Italy has risen to prominence on the international stage of polo in recent years, winning bronze after defeating England in the last FIP World Championship.

The Roman squad returned to Newport to redeem their record in hopes of claiming the silver Liberty Bowl, inaugurated in 2012, but USA’s teamwork and defense sealed their fate with a final score of 8 to 4.

The match got under way quickly in the first chukker with Michel Nseir scoring the first point for USA with a beautiful assist from Minnie Keating, who then scored another point for her team on a penalty hit. Massimo Elser was there to sneak in a point for Italy before the end of the first chukker. Both teams continued to battle, and bumped heavy on defense keeping each other out of the goal. But, Keating was able to snag a point for USA on another penalty hit. Defense continued into the third chukker as each country galloped and swung, but was unable to push past the posts. In the last minute, Nseir outrode Italy and scored one point for USA, ending the chukker with a half-time score of 4 to 1.

Both teams regrouped, polished their armor, and were ready to fight for the win. Italy stood their ground as they scored two points, one by Massimo Elser and another by Paolis, closing the gap and keeping USA scoreless in the fourth chukker. USA refused defeat, and reversed the roles, keeping Italy far from the posts as both Torrey and Clemens scored points for the team, pushing them farther ahead. The sixth and final chukker was the last stretch of hope as both teams pushed for victory, bumping and galloping before their spectators. Nseir began the final face-off as he smacked the ball through the posts for USA, but Massimo Elser was right behind him to attack and redeem Italy with another point. Both teams continued to battle until Clemens found his way to the top, scoring the last and final goal for USA, as the final bell rung and Italy surrendered to a final score of 8 to 4.

A weekly door prize drawing of a pair of shoes from Rockport was awarded to one lucky winner, and the winners of spot 14 for Best Tailgate judging received a prize Tailgate Trunk from Stella Artois. The match will concluded with the Veuve Clicquot Champagne Toast & Trophy Presentation of the USA vs. Italy Liberty Cup, with prize giving by Italian team hosts Brian Cunha and Bekki Schenker, along with autograph signing and cocktail hour to mingle with the players before an authentic Asta la Pasta buffet by Chef Fatigati of Portsmouth.

During their visit, the Italian team enjoy America's Cup Charter sailing, paddle boarding - courtesy of Island Surf & Sport , tennis at the International Tennis Hall of Fame, helicopter tours with Bird's Eye View Helicoptour Tours, Newport Mansion tours and a team dinner at the one and only Clarke Cooke House for a truly memorable visit to the City by the Sea.

“Our sponsors have been with us since the beginning. Without their support, the Series would not be as extensive as it is,” explains Dan Keating, Polo Series founder.