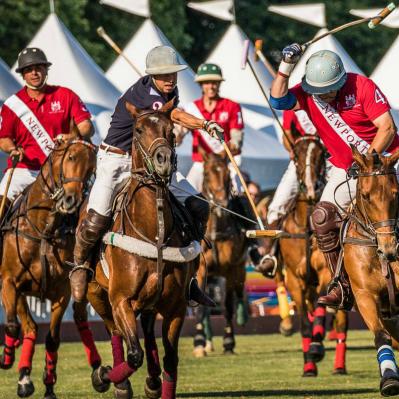 The Newport International Polo Series XXV featured Newport vs. Boston, vying for the prestigious Shreve Crump & Low Cup at 5pm on June 25. Get additional match info via private email subscription, including a Game day Scorecard (sign up) and the weekly Emagazine (sign up).

The Boston team returned for a shot at reclaiming the Shreve Crump and Low Cup this year on Saturday, June 25th. This match was the first of in the City Series, a highlight of the Newport International Polo Series presented by your Rhode Island BMW, featuring challengers from around the US in classic 6-Chukka matches against the home team.

During the first Chukka, Coles got the Boston team off to a good start with the first goal of the game. However, this goal was matched by a goal from Newport's Charlie Bullis for a 1-1 draw. The second Chukka started quickly with Newport's Bullis and DeAngelis both scoring goals, but the gain was cut in half by a goal from Boston's Snow, until, DeAngelis quickly scored again, but matched by Ellis, until Newport padded the lead with Bullis' point to end the chukker leading 5-3.  During the third period, Newport kept the pressure on with 3 goals (two from Bullis, one from Torrey) to Boston's one (Snow) for a 8-4 halftime lead.

Newport maintained its momentum in the 4th chukker, with a pair of goals byTorrey, with only a point in retaliation by Boston's Coles, making the score 10 to 5.  The battle reignited in the 5th chukker as a rally of 5 points were scored back and forth, starting with Keating for Newport, then Snow, then DeAngelis, then Snow and finally Bullis for a 13-7 tally.  Boston made a last stand in the 6th period, starting with Snow, snuffed out by DeAngelis, and still fighting, was Strouss, but the buzzer ended the match 14-9.

During the match, a weekly door prize drawing of a $150 Newport Restaurant Gift Card courtesy of Cox, went to a lucky attendee, and the Best Tailgate received a Picnic Trunk from Stella Artois. The match conclude with the Veuve Clicquot Champagne Toast & Trophy Presentation by Shreve Crump & Low, as well as an autograph signing and cocktail hour to mingle with the players.

The Shreve, Crump & Low Cup is a treasure from America’s oldest and most beloved purveyor of fine gifts.  Since 1796 Shreve, Crump & Low has specialized in the sale of fine jewelry, timepieces, rare antiques, gifts and other works of arts.  Visit their Boston Flagship store situated on Newbury Street to view a collection of beautiful engagement rings, diamond jewelry, and other precious gemstones.  Discover the Shreve, Crump and Low Watch Salon on the second floor offering the finest in Swiss and German timepieces from fabled brands… And in the spirit of the Boston tradition browse the selections of fine French and English Crystal, Hungarian porcelain, Italian silver, American leather goods, and extensive collection of rare antiques from around the world. For more information on the Shreve, Crump & Low experience please call the Boston store at 617-267-9100, or visit www.shrevecrumpandlow.com