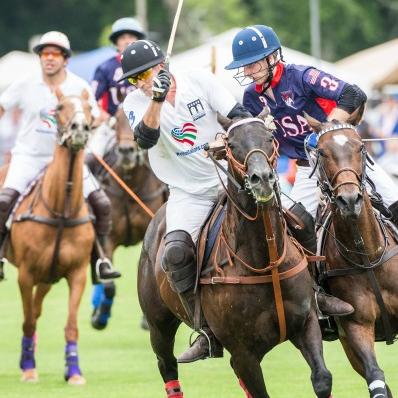 The Newport International Polo Series XXV featured USA vs. Italy at 5pm on July 9th. Get additional match info via private email subscription, including a Game day Scorecard (sign up) and the weekly Emagazine (sign up).

Saturday July 9th, was a nailbiter for those watching the game at Newport International Polo Field. Italy and USA were two teams both fiercly competitive and determined not to lose. On this date the Italian team returned to stake its claim on the elusive perpetual USA vs. Italy Silver Trophy, led by Captain Marco Elser and top players from Rome, home of the oldest of Italy's 15 polo clubs, where only about one hundred and fifty players play year-round, even on beaches and frozen Alpine lakes in winter! Italy has risen to prominence on the international stage of polo in recent years, winning bronze after defeating England in the last FIP World Championship making this match one you did not want to miss.

Playing for Italy in the first position was Raimondo Visconti. In the second was Matteo de Paolis. In the third was Massimo Elser, and in the fourth was Marco Elser.

Playing for USA in the first position was Micheal Nseir. In the second was Chip Steigler. In the third was Sam Clemens, and in the fourth was Peter Friedman.

Italy was the first to put a point on the board with fourth position player Marco Elser scoring. However, this was quickly matched with a point from USA's Sam Clemens. The second Chukka followed similarly with USA scoring a point (Steigler) only to be met by one from Italy (Massimo Elser). During the third Chukka, however, Italy finally pulled ahead by scoring three points (Visconti:1, Marco Elser: 2) while USA struggled and scored none. In traditional American fashion though, USA pulled themselves up by their bootstraps and came back in the fourth Chukka scoring three more points (Nseir, Steigler, Friedman) while Italy scored only one (Paolis) leaving the score going into the fifth Chukka 5 to 6, Italy. Two more points were earned by America in the fifth Chukka, both scored by Clemens, meanwhile Italy's Paolis fought hard and scored another for Italy.

Thus, like every great match in history it came down to the final Chukka; the score was seven to seven and both teams were feeling the pressure. During the final Chukka Italy pushed USA to the max but USA did not crumbled under the pressure. Instead like coal turing into a diamond, it grew even stronger scoring one final point (Clemens), ending the Chukka eight to seven. USA takes home the victory!

During the match, a weekly door prize drawing and the Best Tailgate were awarded.  The match concluded with the Veuve Clicquot Champagne Toast & Trophy Presentation, as well as an autograph signing and cocktail hour to mingle with the players.