Another Victory Over the Red Coats for USA 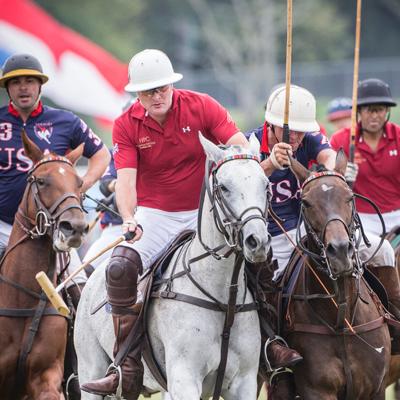 The prolific polo nation, England, was represented by Martin Hay at #1, Omar Mangalji at #2, Ed Courage at #3, and Gus Prentice at #4.

Defending the title for team USA were Michel Nseir at #1, Heather Souto at #2, Dan Keating at #3, and Rory Torrey at #4.

A special live performance of the national anthems by Dennis Jeter, gave way to the first throw-in by Lucy Ratcliffe, season one winner of Britain’s Next Top Model.

With the ball in play, USA went on the immediate offensive, knowing that the players would have to give their all to defeat the Brits.  Souto made an immediate play on goal for the home team, followed by Torrey, and then Souto again, giving USA a 3 goal lead to start the match.  Chukker two saw strengthened defense as balls sent to goal were plucked out within feet of the line by opposing players.  Keating managed one goal for USA, and Courage got England on the board, ending the chukker 4-1.  England gained momentum in the third chukker.  A well-executed penalty by Mangalji followed by a goal during regulation play closed the gap to one goal, ending the first half 4-3 in favor of USA.

Speed and determination brought the action to a new level in chukker 4 with Hay leading the attack for England.  Hay leveled the score at 4 all, but Souto put USA back in the lead.  USA’s lead was short lived as Mangalji closed the gap once again, tying the match at 5 all.  Torrey stepped in, regaining a 2 goal lead for the home team before the clock ran out.  Mangalgi led off the fifth chukker for England with another neat penalty conversion.  Prentis tied the game for the third time, 7 all, with a goal during regulation play.  Keen to get in on the action, Nseir put USA back in the lead with another goal just as the chukker ended.  England was only two goals away from wresting the cup, but Souto widened the lead for USA, while the team’s effective defense kept England from goal.  For a record two years in a row, Team USA defeated England, 9-7.

During the match, one lucky winner took home a magnum of champagne from Veuve Clicquot in the weekly door prize drawing.  An English country-side transported to tailgate space 39 won the Best Tailgate Picnic Trunk from Stella Artois.  Following the match, the USA vs. England perpetual cup was presented to the teams by Harriet Cross, Britain’s Consul General to New England during the Veuve Clicquot Champagne Toast and Trophy Presentation.