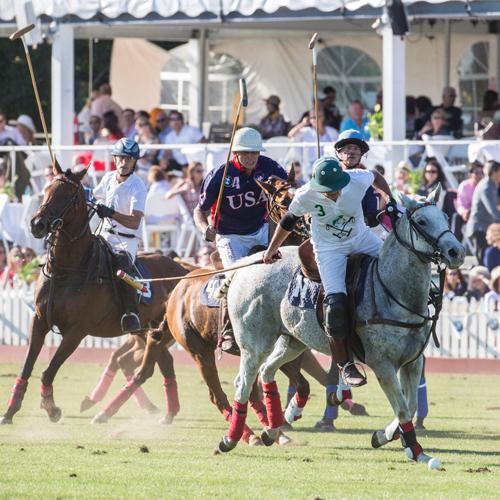 Morocco made its grand debut on Saturday, September 17, in the NBC 10 Newport International Polo Series, presented by the Rhode Island BMW Centers.  The team, made up of top rated civilian players, was greeted with the best Newport hospitality, beautiful weather, and a ceremonial flag raising to celebrate the debut.

Representing Morocco, in the #1 position was Ali Mobtaker, playing #2 was Ameer Jumabhoy, team captain Nour-Dean Anakar was at #3, and at back, Philippe Darroux.

For team USA, Peter Friedman was at #1, Heather Souto played #2, at #3, Chip Stiegler, and playing #4 was Dan Keating.

Anakar led the attack for Morocco, scoring the first goal to open the match.  Souto followed with two goals for USA, but Anakar tied the game at 2-all to end the first chukker.  The teams stayed in lock step through the second chukker as a goal by Friedman was matched with a penalty conversion by Jumabhoy.  Anakar took charge again for Morocco, putting the team back in the lead with one goal to start the third chukker.  But, USA made a strong first-half finish with successive goals by Friedman, Souto, then Stiegler.  The score was 6-4 in favor of USA as the third chukker ended.

The teams stood pat with USA leading 6-4 through the fourth chukker.  A costly penalty by Morocco lead to a goal conversion by Souto for USA, and a widening lead.  Morocco regained its momentum as Mobtaker closed the gap to 6-7 as the chukker ended.  Ready to take the glory Mobtaker led the final chukker for Morroco.  His two goals surpassed USA for a 8-7 lead, but Friedman tied the game at 8 all as the final bell rang out.

After a quick discussion, the umpires settled on a penalty shoot-out from the 60 yard line to break the stalemate.  Mobtaker lined up first for Morocco.  The shot went just wide of goal, maintaining the tie.  First for USA, Friedman’s hit had the distance, but the direction was just north of the goal mouth.  Next, Jumabhoy made an easy conversion to put Morocco in the lead, but Souto did the same, tying the game once again.  Next up, Moroccan team captain Anakar took a swing, but an un-cooperative mount left the ball short of goal.  Stiegler made no advance for USA, so it was down to final two.  Darroux effortlessly scored for Morocco, but Keating didn’t quite have the direction.  Morocco ran out the victor, 10-9 in its debut match.

During the match, one lucky winner took home a magnum of champagne from Veuve Clicquot in the weekly door prize drawing.  A Moroccan inspired tailgate, draped in colorfully patterned prints won the Best Tailgate Picnic Trunk from Stella Artois.  Following the match, the newly minted USA vs. Morocco perpetual trophy was presented to the teams by Rabii Benadada, team Manager from Morocco during the Veuve Clicquot Champagne Toast and Trophy Presentation, and Arnold was named Best Playing Pony.  The 6-chukker match concluded with an après polo Marrakesh Express party with live entertainment with belly dancers, music and authentic culinary experience.

During the team's inaugural visit to Newport, they enjoyed many of the best attractions and highlights in the City by the Sea, including hospitality by Vanderbilt International Properties Ltd, team lodging sponsor;  ROCKSTAR LIMO for ground transportation; Rhode Island BMW Centers for the team fleet;  Schultz Marketing Partnerships for hospitality; Birds Eye View for the aerial tours; Newport Mansion tours; America's Cup Charters for a glorious sail onboard Intrepid (racing this week in the North American 12M Championships);  Clarke Cooke House for a classic team dinner & dancing in the Skybar; Newport International Boat Show; and much more.