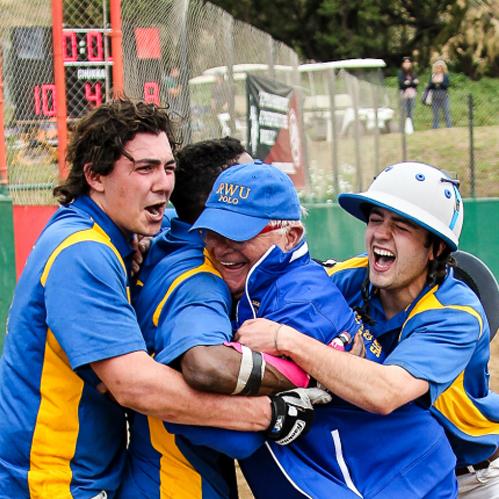 The Roger William’s University Men’s Polo Team made historic firsts at the United States Polo Association’s National Intercollegiate Championship (NIC), which took place from April 3-8, 2017 in Santa Barabara, California.  The two-year old RWU varsity polo team has achieved significant milestones this season, beating out top established universities for the Regional Chamlpionship to earn a berth in the national tournament for the first time, and claiming the national title.

Entering the NIC ranked #2 seed, RWU received a bye to the semi-final round, in which it prevailed over wildcard team, Cornell University to advance to the finals.  In the Final, RWU faced another first-time finalist, Southern Methodist University (SMU), who had won back to back wins, in the first round and a semifinal round upset over the #1 ranked UVA, to advance to the Final.  This was the first time in the 95-year history of the tournament that RWU and SMU were in the Final, competing for the John R. Townsend Men's Intercollegiate Polo Trophy, inaugurated in 1922.

As the Final began, competition was fast and furious as the closely matched teams vied for control of the arena.  An early lead by SMU was reduced to a tie, a sequence that repeated over and over in the first two periods, ending the first half tied at 6-6.

RWU pulled out a three-goal lead in the third chukker, but during the fourth period an equally determined SMU squad, with the benefit of additional players to sub in throughout the match, chipped away at RWU's lead, and scored the tying goal in the last 30 seconds of regulation play, at 11 apiece, sending the match in a penalty shootout, in which three players from both teams each get an undefended hit at goal from the 25 yard line.  The two teams remained in lock-step in the first round of penalty shots, with one player from each side scoring, sending the match into double overtime for a second shoot-out.  The mounting suspense finally climaxed as RWU's George Hempt scored the winning goal, and SMU's final attempt went wide.  Fans in the Santa Barbara arena and at a Watch Party organized on Roger Williams University campus in Bristol, RI erupted with cheers and applause for the victors.