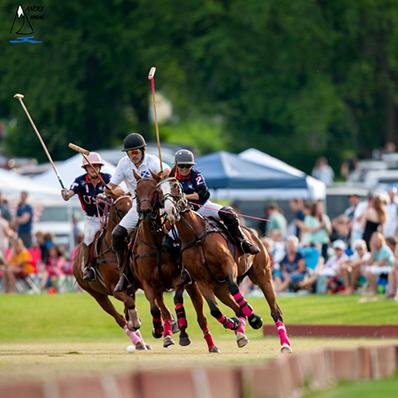 USA outlasted Scotland in a fiercely contested match on Saturday, June 16th, 2018, in the second international faceoff of the NBC10 Newport International Polo Series 27, presented by BMW.  The home team eventually pulled away to close out the challengers 7-4, and hoist the perpetual trophy for a consecutive victory over the Scotts.

The national anthems of Scotland and USA followed the introduction of players.  Wearing white for Scotland in the #1 position was Mike Christopherson, with Jamie Douglas at #2, Hiro Suzuki at #3, and James Douglas at #4.

Representing USA was Minnie Keating in the #1 position, with Heather Souto at #2, Dan Keating at #3, and Jim DeAngelis at #4.

Despite galloping attacks by both squads, USA and Scotland's defenses kept the match scoreless through the 1st and 2nd chukkas.  It wasn't until the third chukka that USA was able to take a 2-0 lead over Scotland with goals from M. Keating and DeAngelis to end the first half in the lead.

Suzuki was finally able to answer USA's charge and scored the first goal for Scotland to start the second half.  By the end of the fourth chukka, D. Keating extended USA's lead 3-1.  Suzuki and D. Keating continued to exchange goals in the fifth chukka, with Suzuki scoring two goals for Scotland and D. Keating scoring one goal for USA.  D. Keating continued his scoring streak and began the sixth chukka with another goal for USA.  Suzuki once again responded for Scotland, and put his team within a one goal deficit of USA.  M. Keating and Souto were able to solidify a win for USA with two final goals in the sixth chukka, which gave USA a 7-4 win over Scotland.

During the match, a lucky lady from Somerville, Massachusetts won a magnum of Veuve Clicquot Champagne in the weekly door prize drawing.  An extravagant tailgate party in space 39 wowed the judges by displaying many miniature National Flags of Scotland and the Royal Arms of Scotland. The festive supporters dressed in kilts to show their loyalty for team Scotland. Specialty vendors and concessionaires were present in the Hospitality village at the polo grounds, and included the Twisted Pony Cocktail Bar, Horseshoe Wine Bar, Newport Polo Pro Shop, Flint & Flame and gourmet food trucks.

After 6 chukkas, the match concluded with the Veuve Clicquot Champagne Toast & Trophy Presentation, as well as an autograph signing to meet the players.  The USA vs. Scotland Perpetual Trophy was presented by Alice Bouman, General Manager of Grace Vanderbilt, Official Headquarters of Team Scotland.  The evening concluded with an Après Polo Scottish Stovie to celebrate Scotland's efforts with traditional savory foods native to Scotland.

While in Newport, the Scotland Team enjoyed many of the best attractions and highlights in the City by the Sea, including hospitality by Grace Vanderbilt, team lodging sponsor;  riding in style in a BMW X5 SUV; Newport Mansion tours; Secret Garden Tours of Newport for exclusive access to the private gardens of Newport's Point District; a glorious sunset sail;  Sightseeing courtesy of Scooter World;  Tennis on the legendary grass courts of the International Tennis Hall of Fame;  Paddle boarding with Island Surf and Sport; cocktails & dancing at the Season Kickoff Bash on the eve of the match at the one and only Clarke Cooke House, and all the great goings on in the City by the Sea.

The official Scottish Team headquarters, Grace Vanderbilt hosted a Tartan Shindig on the eve of the match to heighten the celebration of the return of an audience favorite to our international lineup this year.

Grace Vanderbilt, 41 Mary Street, Newport RI, is a historic boutique hotel 2 blocks from the delightful waterfront of Newport, and is one of the town’s best kept secrets.  Originally built by Alfred Vanderbilt, a scion of the wealthy Vanderbilt family, the 1909 property is a vintage Newport mansion hotel with 33 rooms and luxury suites and a lavish spa & fitness center with indoor and outdoor pools and highly-acclaimed restaurant, The Vanderbilt Grill.

"Polo is an international sport, played in over 80 countries around the globe, and we are honored to have teams traveling great distances to play in Newport," stated Dan Keating, captain of the USA squad.  "A following of Scottish fans from throughout the region has grown each time the Scotts are on the schedule, wearing kilts and waving 'the Saltire' St. Andrews cross in lively support of their fellow countrymen."

Info about the Polo Series, our venue, concessions & amenities, and other information can be found on the About Newport Polo page.