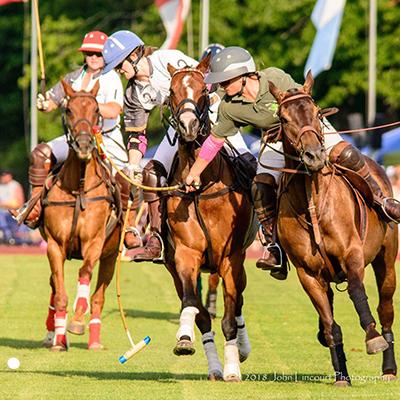 Polo fans were in for a treat on Saturday, June 30th, as the Independence Cup of 2018 featured the East Coast Women's Polo Championships, Presented by Dechra. The first match featured the finals of the Handicap Tournament - a matchup between Tolerance Cider and Boston Avalon.  The consolation of the Open Tournament followed the first match, with Island Cowgirl and Heiades International battling for the third place finish.

The national anthem followed the introduction of players from Tolerance Cider and Boston Avalon.  Wearing green for Boston Avalon in the #1 position was Natalie Barton, with Elizabeth Owens at #2, Tiamo Hudspeth at #3, and Athena Malin at #4.

Representing Tolerance Cider in white was Hannah Stowe in the #1 position, with Lizzie Parker at #2, Minnie Keating at #3, and Izzy Parsons at #4.

Parsons began the first chukka with two quick goals for Tolerance Cider, and continued her streak into the second chukka with her third consecutive goal, giving her team a 3-0 lead. Hudspeth was finally able to respond for Boston Avalon, but Keating scored her first goal of the match to put Tolerance Cider in another 3 goal lead by the end of the second chukka. Parker scored the lone goal of the third chukka, which made the score 5-1 in favor of Tolerance Cider. Hudspeth rallied for Boston Avalon with a quick goal at the beginning of the fourth and final chukka, but to no avail, as Parsons responded with her fourth and fifth goals of the match, to give Tolerance Cider a 7-2 win over Boston Avalon, and the first place trophy of the Handicap Tournament.

Following the finals of the Handicap Tournament, fans were treated to another two chukkas of polo with the Consolation of the Open Tournament. Wearing gray for Island Cowgirl in the #1 position was Ula Green, with Julia Steiner at #2, Heather Souto at #3, and Courtney Asdourian at #4.

Representing Heiades International in white was Rachel Turner in the #1 position, with Lizzie Parker at #2, Minnie Keating at #3, and Izzy Parsons at #4.

Keating opened the match with a goal for Heiades International to give her team a one goal lead, but not for long, as Souto put Island Cowgirl on the board to end the first chukka in a 1-1 tie. A similar pattern took place in the second chukka, this time with Steiner putting Island Cowgirl in a 2-1 lead. Turner responded for Heiades International to end the second and final chukka in a 2-2 tie. Due to the match deciding third and fourth place of the Open Tournament, the teams were forced into a penalty shootout.

After 6 chukkas, the match concluded with the Veuve Clicquot Champagne Toast & Trophy Presentation, as well as an autograph signing to meet the players.  The inaugural Anne Hutchinson Liberty Bowl was presented by John Hartmayer, Atria's Senior Vice President of the Northeast Region.

Info about the Polo Series, our venue, concessions & amenities, and other information can be found on the About Newport Polo page.