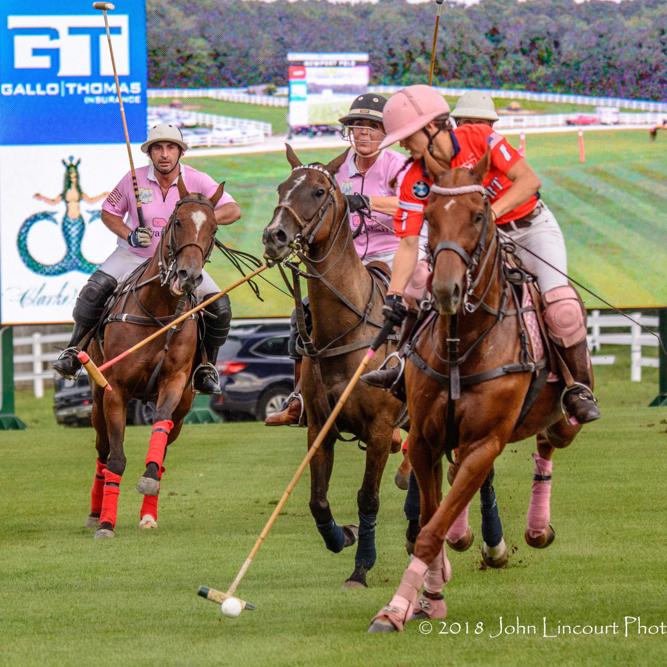 The 7th annual rivalry between Newport and New York was a horse race from the moment the ball was thrown in, as the Big Apple sought to avenge last year’s spanking while Newport hoped the spectacular Clarke Cooke Cup that was on the line would immortalize their achievement on the day.

From New York in prepster pink were Al Keshvarzian at #1, Lori Summer at #2, Nick Feldman at #3 and Guillermo Usandizaga in the #4 position. Meeting the challengers were Newport’s Minnie Keating at #1, Rory Torrey at #2, Dan Keating at #3 and Hamish Wates at #4 in home team red.

NYC launched into high gear right from the throw-in, with Usandizaga leading the offensive, racking up three unanswered points while his teammates thwarted the Newport line, for a 3-0 start. In the second period, Newport was quick to stop the bleeding and take command of the chukker, with a penalty conversion by Wates, and a field goal by Keating before Usandizaga struck again with a point for the opposition, but Wates and Torrey kept guns blazing with two more points for a home team comeback to tie the game at 4 a side. The stakes were raised in the third period, when Usandizaga and Feldman tag-teamed for a pair of NYC goals that were matched with a field goal and penalty conversion by Torrey, for a halftime score of 6-6.

A cast of several thousand spectators replaced the divots during the time-honored halftime stroll onto the pitch to resume the second half on a perfectly manicured lawn once again. NYC upped the ante with field goals by Feldman and Keshvarzian but Torrey kept Newport in the hunt with his fourth point of the match, to trail 8-7. To the cheering crowd’s ovation, Newport took the lead in the fifth chukker when Wates drilled a field goal, followed by a decisive penalty conversion, but the tie was restored with a waning point by Usandizaga leaving it 9 all. The final chukker offered Wates another penalty conversion advantage, but NYC’s ringer Usandizaga eventually evened the score with his 7th point of the match, which held for most of the period, until another late Usandizaga goal gave NYC a teetering lead, then two quick points by Feldman and Keshvarzian left no doubt, though the match itself was neck and neck, the final score of 13-10 awarded NYC the top spot on the newly anointed sterling Clarke Cooke Cup.

Presenting the Clarke Cooke Cup was Jeannie Sullivan from the iconic Clarke Cooke House in Newport to its first winner, New York who hoisted the legacy trophy high over the crowd during the Veuve Clicquot trophy celebration. Each member of the visiting team received a commemorative gift, courtesy of Flint & Flame, purveyors of professional grade, precision culinary tools.

During the match, a weekly door prize drawing from Opt Eyewear Boutique of Providence awarded a pair of designer sunglasses to a lucky winner, while the Best Tailgate was a runaway with elegant linens and silver & crystal table settings, floral arrangements and a feast for the senses, earning a special prize from Stella Artois. The hospitality and vendor villages bubbled with exciting offers of fascinators and jewelry, sunglasses, portrait photography, cutlery, leather goods from Brahmin, wine sampling, official polo team gear and concessions including the Twisted Pony Cocktail Bar, while this season’s new Veuve Clicquot champagne cart circled the field with bubbly service!

Named the Polo Series’ Restaurant of the Year for the 7th consecutive year for innovative cuisine and legendary ambiance as the spot to see and be seen, the Clarke Cooke House is a quintessential Newport experience and polo players’ entertainment headquarters in downtown Newport (historic details).

There's no sport like polo. Be a part of it!  Newport Polo hosts the Newport International Polo Series 27, and is the home of America's first polo club, est. in 1876, offering public exhibition matches, polo club member services for grass & arena polo, and polo instruction year-round; founding member of the United States Polo Association,