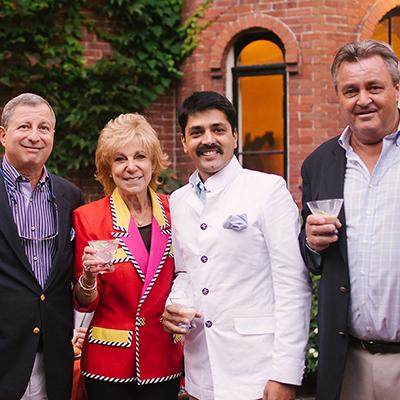 A Friday evening reception, dubbed Bollygood, at Newport’s Merrilton estate welcomed the international guests of honor, greeted by an enthusiastic entourage in the colors of India.  Notables including Stacie Mills and Sharon Cameron lawn ushered in Newport’s smart set, a Carnegie contingent came all the way from the Portsmouth enclave, while NYC was represented by Ceasar Anquillare and guests, joined by members of the Newport Polo Club and the evening’s hosts Mary Marwick & Peter Jenkins.  Attendees enjoyed a menu of Indian hors d’oeuvres and extraordinary libations created by The Cocktail Guru, while Singh invited supporters to visit India and explained the ongoing conservation and education efforts in rural Rajasthan.

The following day, a record mid-September throng assembled at the Newport Polo grounds to cheer on both teams as a well-prepared USA squad from America’s original polo club held the home-field advantage against India, packing 2 millennia of game tactics from the land of polo’s origins, to compete across 6 chukkers in the Newport International Polo Series.

A special field-side lounge was created for attendees to take in the match, sponsored by The Cocktail Guru, to fund the Shivrati Trust and Water Wisdom foundation.

The audience cheered throughout the close contest. As the clock wound down, India just edged the victory to finish its U.S. tour on a high note.

View an album of images from the Bollygood reception and USA vs. India polo match.

Water Wisdom Foundation, established in March 2018 is building on 30 years of achievements in India by its sister organization, Water Harvest, to bring the adequate provision of water and safer, more secure supplies to the underprivileged of India.  Focused, small-scale solutions, continued education, and a collaborative community-based approach is the hallmark of the Foundation’s approach.  Initial efforts include the publication of two guides to water laws and conservation methods, and outreach through location schools.  Sharing similar values and objectives, the Shivrati Trust was established in 1949 in response to the disruption of services to rural communities following India’s independence.  Today, The Trust has funded co-operative schools and annual scholarships, health check-ups, conservation of heritage sites and traditions, and education for the prevention of animal cruelty.