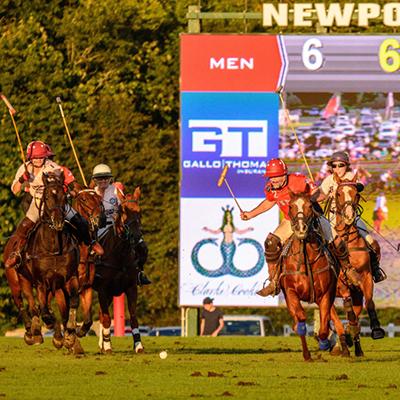 Brilliant sunshine and perfect temperatures set the stage for the thrilling finale of Season 27, when the NBC10 Newport International Polo Series, Presented by BMW hosted the Battle of the Sexes.

1993 marked the first Battle of the Sexes held in Newport, featuring celebrity captains Stephanie Powers and Ron Ferguson.  It was a memorable event highlighted by an age old challenge and rare Cheetah Run for charity.  Since that early battle, women's polo has come of age in Newport.  "Our Women's East Coast Open demonstrated that women players can be every bit as talented and competitive as their male counterparts, and a showdown was inevitable," explained Polo Series Founder, Dan Keating.

Newport's Men were represented by Brendan Tetrault in the #1 position, followed by Wayne Gordon at #2, Luke Merrick at #3, with Sam Clemens and Peter Friedman alternating at #4.

Lauren Bilsky at #1, Jenna Davis at #2, Minnie Keating at #3, and Amy Rice playing #4 met the challenge for the Newport Women.

A fiercely competitive match ensued from the start as the Men and Women duked it out for control.  Clemens nearly completed a run on goal within the first few minutes, but the Women turned the play around.  Finally, it took every one of the men to advance the ball and Clemens to finish for the first goal.  Then, Clemens made the second goal for the men on a neat cut backshot to end the first chukker 2-0.  Vigorous defense yielded a few close saves as the ball was plucked off the goal line until a helpful pony racked up a third Men's goal.  The Women's consistent teamwork finally paid off when Davis scored their first goal on a well coordinated penalty hit.  Merrick managed a final goal for a 4-1 Men's lead at the end of the second chukker.  Teatrault made a cracking start for the Men, executing a 50-yard hit under his horse's neck. Bilsky regained control for the women, fending off Clemens while carrying the ball the length of the field to t-up Davis for another goal.  It looked like the men held the competitive edge at the close of the first half, leading 5-2.

Davis brought the power for Newport Women to open the second half, sending a 30 yard penalty shot through the goal mouth in the final seconds to close the gap, 5-3 in favor of the Men.  Gordon continued the Men's advance with another goal in the first few minutes of the fifth chukker.  Then, the Women set the field alight.  Despite the cut-up conditions from a rainy week, Davis made quick work of a scoring on a ball put in front of the goal by her team, and another on an impressive cut shot from deep in corner of the field.  Less than 30 seconds remained as Keating roared off on a hit from the center, tieing the game as the cheering crowd jumped to its feet.  An even score kept both teams on the defensive in the final chukker, trying to prevent each other from gaining the advantage.  A missed clearing shot gave Gordon the opening to put the Men in the lead, 7-6 at the half-way point.  The Women had several near misses as the clock ran down.  The final bell rang out a narrow victory for the Men and a clarion cry for the women to train even harder for next season.

The match concluded with the Veuve Clicquot Champagne Toast & Trophy Presentation, as well as an autograph signing with the players.  Presenting the Commander JB Leavitt Cup - (a Paul Revere replica liberty bowl, symbolic of the New England region) was John Olinger, founder and CEO of ROCKSTAR Limo, to the Newport Men who hoisted their victory trophy high over the crowd during the celebration before filling it with champagne and sharing a symbolic drink of friendship among all the players.  Each member of the winning team received a commemorative gift, courtesy of Flint & Flame, purveyors of professional grade, precision culinary tools.

During the match, a weekly door prize drawing awarded a pair of designer sunglasses from OPT Eyewear Boutique, while the Best Tailgate - an Autumn celebration in the chalets - earned the coveted prize from Stella Artois and a moment of fame on the Jumbotron.  The hospitality and vendor villages bubbled with unique offerings from fascinators and jewelry to designer sunglasses, portrait photography, professional cutlery, leather goods, old & new world wine sampling, the 2018 collection of official polo team gear and concessions including gourmet Food Trucks and the Twisted Pony Cocktail Bar, while this season’s new sensation, the Veuve Clicquot on The Go champagne cart circled the field with bubbly service!

There's no sport like polo. Be a part of it!  Newport Polo hosts the Newport International Polo Series 27 and is the home of America's first polo club, est. in 1876, offering public exhibition matches, polo club member services for grass & arena polo, and polo instruction year-round; founding member of the United States Polo Association.