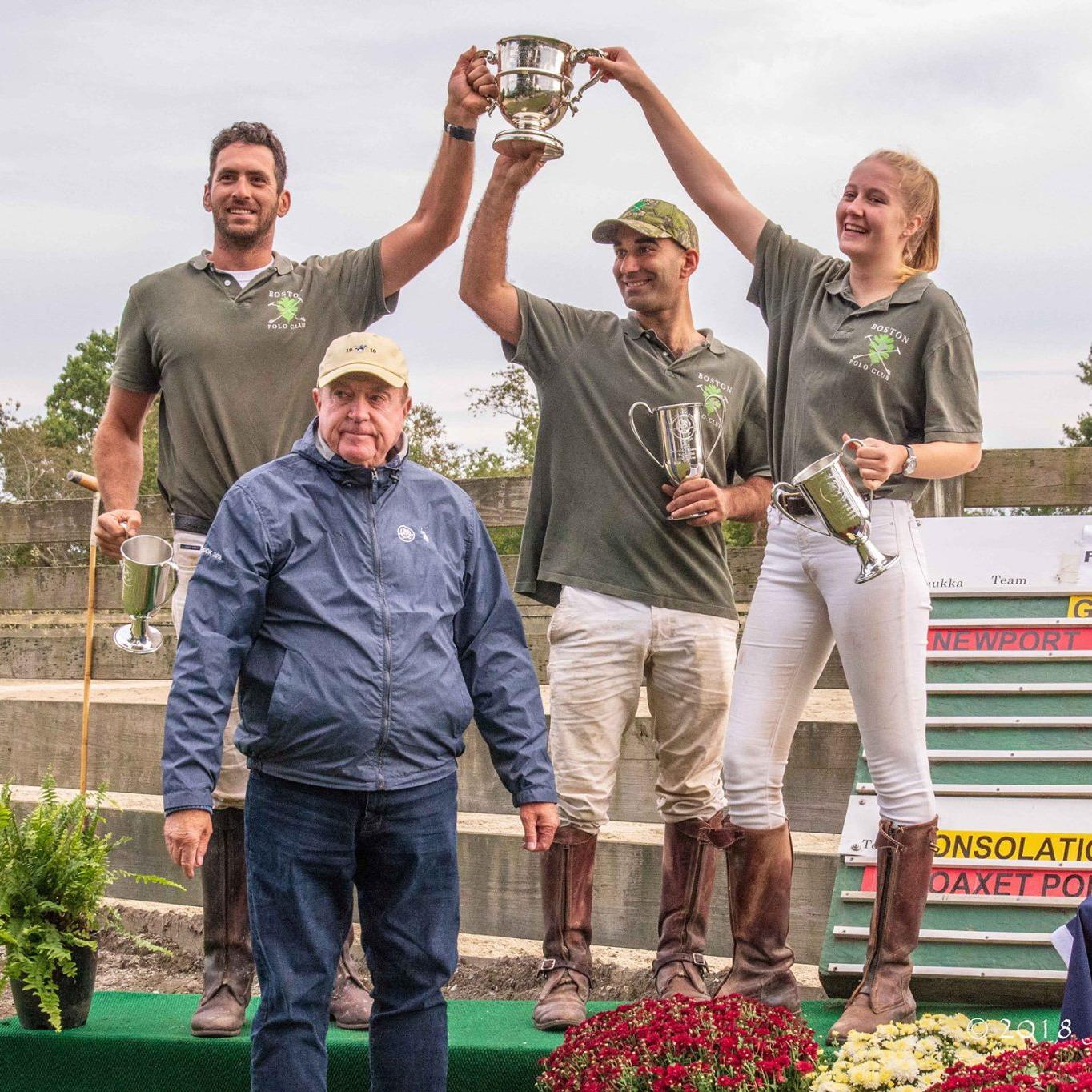 The 2018 USPA National Sherman Memorial, one of arena polo’s oldest tournaments, showcased some of the best arena players in the nation, traveling from across the country to vie for the prestigious George Carter Sherman perpetual silver trophy. Among 5 closely matched, 3-6 goal handicap teams that competed at Newport Polo, Boston came out the victors.

“We are very excited to have hosted the Sherman Memorial for the second consecutive year, with players coming from across the US to make their mark in polo history“, shared Dan Keating, Westchester Polo Club President and Delegate to the United States Polo Association. The 3-day tournament, on October 12-14, took place at Newport Polo's outdoor arena & training facility, home of America’s oldest polo club.

Despite overnight showers, the newly resurfaced outdoor arena played flawlessly from the opening round to the Finals. Day 1 competition had the home team, Newport (Patrick Quigley, Dan Keating and Rory Torrey) defeated by defending champions, Tolerance Cider (Lukas Merrick, Minnie Keating and Pedro Cabrera) 16-14 in Game 1. Tolerance advanced to Game 3 the next day, while Newport regrouped for Sunday’s Consolation, and all the teams enjoyed a waterfront meet & greet reception and dinner at a nearby marina eatery in Portsmouth, RI on Friday night.

Competition resumed on Day 2 with Autumn weather for fast, high scoring matches and plenty of 2-pointers. In Game 2, playing for a berth in the Finals were Pittsburgh (Peter Jenkins, Justin Powers and George Hempt) against Boston (Elizabeth Owens, Mark Tashjian and Jeff Scheraga) who came out the 20-12 victors. The second berth was determined by Game 3, when Acoaxet (Ula Green, Charles Bullis and Dave Bullis) was edged out by Tolerance Cider, 10-7. A seaside Lobsterboil and fireworks display under starry skies that evening set the stage for the conclusion of the tournament the next day.

Supporters gathered on Sunday to cheer on the teams, starting with the Consolation round robin, with Acoaxet finishing with the tournament’s Bronze against rivals Newport finishing in 4th and Pittsburgh. In the suspenseful Final, an early 6-2 lead by Tolerance was overcome, 8-7, by Boston, then leveled out 11-11 after 3 periods, until Boston persevered 17-13 in the final chukker as the newest champions, earning Elizabeth Owens, Mark Tashjian and Jeff Scheraga their place in polo history.

View the Album of Photos.

The National Sherman Memorial Tournament, inaugurated in 1935, is played to honor one of the giants of arena polo and is one of the oldest arena polo tournaments in the United States Polo Association. (See the complete list of past winners, p. 247 'Historical Tournament Results' published by The Museum of Polo and Hall of Fame.) Known as the “father of indoor polo”, Hall of Famer George C. Sherman, Sr. was almost single-handedly responsible for organizing and refining this now-popular variation of the sport. He introduced the inflatable ball, redesigned the standard polo equipment for the arena game’s specific needs and modified the rules of outdoor play for arena use. He was the founder & first president of the Indoor Polo Association (from 1915 to 1926), which merged with the USPA in 1956. He was zealous in bringing young players into the sport, presenting the Interscholastic Cup in 1928. Since all Intercollegiate and Interscholastic polo is now played in the arena, he may be said to have sired this invaluable training ground as well. His son, George C. Sherman, Jr., was also an arena high-goaler and made important contributions to the sport as a USPA Chairman and one of the founding spirits of the Museum of Polo. (Research information provided by Museum of Polo & Hall of Fame).

For more than 375 years, Newport has been welcoming visitors from near and far to its charming New England coastal harbor, earning its reputation as America’s First Resort. Evolving from its origins for religious freedom to prominent colonial port to Gilded Age playground to today - a destination ripe with sport, culture, history, art, entertainment and scenic beauty, distinctive shops, renowned restaurants, diverse accommodations and world-class events, its past, present, and future make this international resort uniquely legendary. also hosts the Newport International Polo Series, a popular 18-week summer exhibition series.