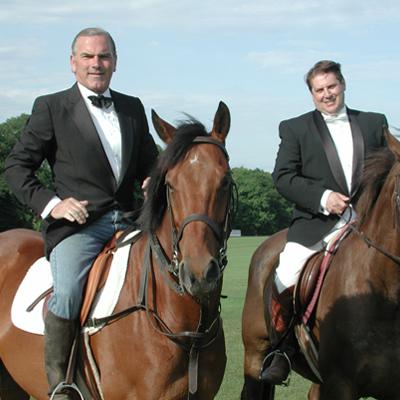 Oriental was the theme for this year’s International Polo Ball and benefit polo weekend, as the Newport Polo Club and friends embarked this season on a journey to “trace polo’s roots” back nearly two thousand years to its Asiatic origins.

On Friday, August 1st, the Newport Polo Club hosted the annual International Polo Ball, this year an oriental black-tie gala at Astor’s Beechwood mansion on famed Bellevue Avenue in Newport. The Victorian mansion, redecorated as an Asian palace for the occasion, is the former home of Caroline Astor, the undisputed “Queen of American Society” who made Newport the social center of the Gilded Age a century ago. Inspired guests outfitted in imaginative oriental formalwear embellished their costumes with henna tattoo artistry offered from a Mongolian ger tent on the terrace.  Later they dined on authentic Northern Indian cuisine, were entertained by belly dancer Barbara Donahue, contended over a lively auction and danced the centuries away with Time Rider band.

On the following day, Saturday, August 2nd, the Newport International Polo Series featured a spirited 8-goal match with USA defeating France 14-10, followed by a benefit Lobsterbake in the authentic New England style, steamed in seaweed in a pit of embers. The Mongolian ger was an added attraction as spectators lined in front for henna tattoos and a peek at cashmere mementos of the occasion.

Honorary guests for the weekend included representative Ben Marten from the Mongolian Polo Federation, and the French Polo Team captained by Mathias Guerrand-Hermes, winner of the 2002 European Open Polo Championships. The genuine Mongolian ger was provided through the courtesy of the Mongolian Ambassador to the United Nations.

Proceeds from the gala and lobsterbake benefited the Polo Education Foundation, a non-profit 501[3]c organization registered in Rhode Island with a mission to support and develop training and educational programs surrounding the sport of polo. Gala co-chair John Gelati stated, “As the successors to the oldest polo club in America, we are dedicated to the endurance of this culturally significant sport and to our place in its historical evolution and tradition of international competition. And we will do it in style!” adds Gelati.

As the home of the first polo club in America, and first international capital for polo competition, Newport has played a historic role in the expansion of polo in this hemisphere, and the legacy of Newport’s early players includes unparalleled international championships and revolutionizing the sport considerably to its modern form.

USA vs France Match Results: Gene Goldstein played in the #1 position for USA, while Dan Keating played #2; Mathew Fonseca lead the USA scoring in the anchor position at #3, and Jim DeAngelis was the #4. Mark Wright, substituted for Fonseca in the fifth chukker after an injury. Playing for France were David Zarra at #1, Mathias Guerrand-Hermes in the #2 position, Michel Dorignac lead the team from #3 postion, Don Black was the #4, and John Klopp substituted in the #1 position. USA took an early 3-0 lead in the first chukker with two goals by DeAngelis, added to a one-goal handicap. The second chukker had a rapid succession of scoring from both teams, by Dorignac and Black for France and Keating and Fonseca (2) for USA, resulting in a 6-2 lead for USA going into the third chukker. Scoring evened out in the third chukker with two for each side, by Guerrand-Hermes and Dorignac for France and Goldstein (2) for USA, ending the half 8-4 in USA’s favor. France came out swinging in the second half with goals by Guerrand-Hermes and Klopp, while Keating added one for USA in the fourth chukker, closing the gap 9-6. In the high-scoring fifth chukker, both teams sustained injured players resulting in substitutions, in a battle of 3 goals for France, all by Dorignac, and 4 goals for USA by Goldstein, Fonseca (2) and DeAngelis, ending the chukker 13-9, to USA’s advantage. In the final chukker, France added two goals by Guerrand-Hermes and Dorignac to USA’s one by Mark Wright, ending the match 14-10 for a USA victory.

Origins of Polo, the world’s oldest team sport, was invented in High Asia at some time during the Mongol era. Murals dating from the Tang Dynasty (6th – 8th century AD) and recently discovered ancient terracotta statuettes of polo playing men and women depict its origins amidst the history of man’s alliance with the horse, which goes back many thousands of years to a distant land where nomadic tribes shared a ten thousand kilometer belt of steppe and mountains, stretching from the Hungarian Puszta to the plains of Manchuria, a land which was once the cradle of Genghis Khan and his successors, whose Mongol empire stretched from the Pacific to Western Europe, and included all China, Asia, the Middle East, the Balkans and much of Russia and Poland. Genghis Khan (1161 – 1228), who welded several hundred tribes in High Asia into the first united Mongol nation, employed polo as one of the official training techniques for his formidable light cavalry. The game was used to hone the basic skills and tactics of horseback archery and the wielding of lances and sabers in fast-moving mounted actions.

With the westward spread of the Mongol Empire, polo was carried to Persia and India and many other kingdoms all over Eurasia. While polo is an adopted sport for Westerners, it was an ancient way of life for the peoples of Asia and the middle east, where horsemanship and battles between mounted soldiers had evolved centuries before they did in Europe. In time of peace it developed into a princely pastime and a vigorous but friendly and honorable way of settling disputes. It soon became known as the Royal Game. On the polo ground, teams of Indian maharajas competed with the officers of the British cavalry, and through the latter polo finally reached England in the late 18th century.

Polo’s aura of superb horsemanship and aristocratic magnificence made it the ultimate sport of gentlemen, and as such its popularity spread throughout the British Empire. In 1876 the first polo club in America was founded in Newport. By the 20th century, it had become a truly international game, played all over Europe, Asia, Africa, and the Americas.

Polo has, at last, come full circle, returning to the places of its origin in High Asia with the Mongolian Polo Federation. With the incentive of several visiting international players, the first modern Mongolian polo games were arranged in the summer of 1997 in the plains and valleys around Khara Korum, the ancient capital of the Mongol Empire.

“Today, in 2003, over thirty polo teams have sprung up in different areas of Mongolia, and all competed at the Second National Polo Championship” explains Ben Marten, after filming documentary footage of the tournament and summer youth polo camp in Mongolia.

The Genghis Khan Polo Club, in affiliation with the Mongke Tengri Polo Summer Camp is organizing summer visits through its company Nomadic Connection. Summer camps for Mongol children started this year, and the first international children’s camp is scheduled for the summer of 2004. For more information, contact: Mongolian Polo Federation: mglpolofed@mobinet.mn or Nomadic Connection: nomadconnect@magicnet.mn

History of Polo in Newport:The predecessors to the Newport Polo Club called themselves the Westchester Polo Club and established Newport as the international capital of polo from the late 1800’s until the outbreak of WWI by inaugurating the famous Westchester Cup, a rivalry between the US and Britain, whose coveted prize and prestige have become a part of polo legend in 14 historic contests over the past 116 years. The three-match tournament was one of the first international sporting events in modern history, predating the resurrection of the Olympic games.

The Newport International Polo Series hosts teams from around the world to compete in polo matches every Saturday from June through September. The polo series, now in its 12th season, is one of Newport’s most popular summer attractions, drawing thousands of spectators. Visiting teams have come from England, Ireland, France, Spain, Portugal, Germany, Greece, Costa Rica, Egypt, India, Ghana, Argentina, Chile, Australia, Jamaica, Nigeria, and Canada. The Newport International Polo Series takes place at historic Glen Farm, located six miles north of downtown Newport at 715 East Main Road (Route 138) in Portsmouth, RI. Glen Farm is the last 100 acres of what was once an 800-acre manorial farm founded in the 1500s, whose classic stone barns were built at the peak of the Gilded Age.