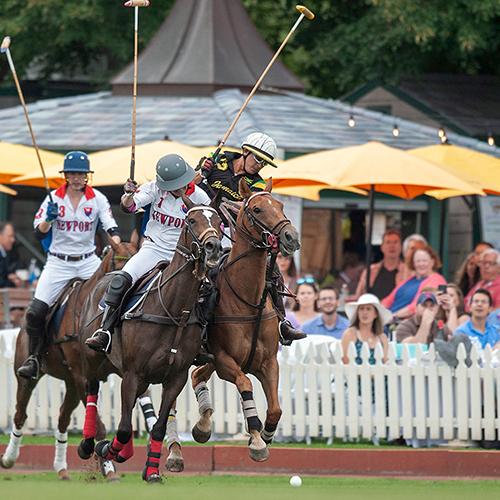 A stunning stalemate developed between USA and Jamaica on Saturday, August 17th for the team's 20th appearance in the Newport International Polo Series 28, presented by Brahmin.  USA broke the deadlock seconds before the first half ended, going on to a 6-4 win to reclaim the perpetual trophy from Jamaica.

Representing Jamaican in Black at the #1 position was Zackary Byles, with Brandon Richards at #2, team captain Shane Chin playing #3, and John Byles at #4.  In white for USA was Peter Friedman playing #1, Sam Clemens at #2, with Heather Souto at #3, and defecting from his home country of Jamaica, Hamish Wates at the back in the #4 position.

Following the players' introductions, the audience rose to face the USA and Jamaica flags rippling over the pitch as both national anthems led into the game.  Among the festive attendees was the Hotel Viking crew, cheering on the Jamaica Polo Team which they had been hosting while in Newport.  Hotel Viking is a Newport icon in the heart of the city, renowned for superior guest accommodations, exceptional cuisine, rooftop entertainment, European spa, and desirable Bellevue Avenue address.

Jamaican flags among the spectators were visible in every corner of the field, making it clear which side the packed audience was on.  Both teams came out swinging for the fences, creating a highly competitive horse race as each side struggled for control.  Possession of the ball changed in rapid succession, while near goals were snatched off the line by opposing defense.  The score narrowly remained 0-0 through the first half, until with 6 seconds on the clock, Wates was first to score, giving USA the lead as the bell signaled half-time.

Play opened up in the second half with daring runs to break the stalemate.  Wates advanced the home team's score 2-0, and Chin finally put Jamaica on the board to end the 4th chukker, 2-1.  Byles continued the offensive, briefly tying the game at 2-all.  Then, Souto made a neat penalty conversion, followed by another goal during regular play to double the score, 4-2 in favor of USA.  The teams changed horses for the final chukker and Jamaica immediately made up lost ground with a penalty conversion by Chin. Souto and Wates paid Chin back double, raising the score 6-3.  Chin made a final push to claim the trophy, but the final bell ended the game with a 6-4 win for USA.

The match concluded with the Veuve Clicquot Champagne Toast & Trophy Presentation. Commemorative prizes and the perpetual USA vs. Jamaica liberty bowl inaugurated in 1994 was awarded by Kara Tajima, Shannon Heafey, Emily Rossin, and Alejandra Merced-Nieves of Hotel Viking, the official Jamaica Team headquarters in Newport.  Commentator, William Crisp, left it up to the crowd to determine MVP for the day, with a unanimous round of cheers for Jamaica team captain, Shane Chin, over USA's Hamish Wates.  An autograph signing to meet the players followed the trophy presentation.  The teams and fans then adjourned to an authentic Jamaican feast, served field-side by Broadway's newest eatery, Humminbird of Newport.

During the match, a lucky lady from Maynard, MA won two pairs of the latest hi-fi wearables, Bose Frames Audio Sunglasses, and an automatic entry into the Turkish Airlines Grand Prize Drawing at the Finals to win a trip for 2 anywhere in the world!  Also, during the match, the Stella Artois Tailgate Contest awarded a fabulous prize to an over the top party with a custom made tent in Jamaican flag colors, matching Jamaica shirts, and a lavisyh buffet of authentic Jamaican fare. Specialty vendors and concessionaires present in the Vendor Village at the polo grounds, including WOOF WOOF, Lauren Hope Fine Jewelry, Seeside Design, Wag Nation, Jamaica Tourism Board, Newport Polo Pro Shop, the Back Line Bar, the Horseshoe Wine Bar, the Davitt Pavilion Patio Bar and Shuck Truck raw bar, the Veuve Clicquot Champagne On the Go Cart, and gourmet food trucks.

While in Newport, the Jamaica players enjoyed many of the best attractions and highlights in the City by the Sea, including VIP ground transportation from Rockstar Limo, a tour of Newport with the new Newport Jaguar Tours, an aerial tour from Newport Helicopter Tours; a glorious afternoon sail with America's Cup Charters; sightseeing fun courtesy of Scooter World; paddleboarding with Island Surf and Sport; a special tour of Water Fire courtesy of Providence River Boat Company.

Stay current with the 2019 team lineup, latest news, events and more by subscription to our eMagazine (sign up) and get match details from the Gameday Briefing (sign up).  Both subscriptions are private and spam-free.

Minutes from downtown Newport, the International Polo Grounds are located at historic Glen Farm, 250 Linden Lane (off Rte. 138) in Portsmouth, RI. This bucolic setting is the last 100 acres of what was once a 700-acre manorial farm whose settlement dates back to the 1600s.  Its classical stone barns from the Gilded Age and its park-like grounds were rehabilitated by polo series founder, Dan Keating, and thrive today as an equestrian & community recreational property, and home of the Polo Series.