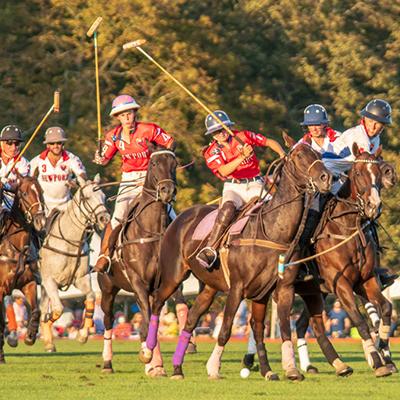 Season 28 of the Newport International Polo Series, presented by Brahmin ended in a photo finish when a tying goal at the buzzer sent the Battle of the Sexes into overtime in a thrilling Turkish Airlines Finals.  A picture-perfect day brought out enthusiastic fans as the Newport Women opened a wide lead in the first half of the match.  With just seconds to go, the Newport Men tied the match and went on the take the silver trophy 10-9 in a riveting overtime chukker and penalty shoot out.

Representing the Newport Women, alternativing at the #1 position were Catie Reed and Mia Purdom, interscholastic and intercollegiate players respectively, with Margaux Buchanan at #2, Amanda Poor playing #3, and Minnie Keating playing back at #4. Defending the Newport Men's 2018 victory was Roger Souto at #1, Patrick Quigley in the #2 position, with Luke Merrick at #3, and Sam Clemens at #4.

A highly defensive start kept the scoring low in the opening chukker as both sides closely marked the opposing players.  Newport Men were first to strike with a goal by Merrick.  Poor immediately equalized for a 1-all tie as the bell rang.  Newport Women turned up the heat in the second chukker with goals by Buchanan, Poor, and Keating to take a 4-1 lead.  The Women's advance was checked in the third chukker, but the Men made up no ground, ending the first half with the Women still leading 4-1.

Anticipation grew as Clemens made up a point for the men in the fourth, then executed a penalty in the fifth that closed the gap 4-3.  Poor gave the women breathing room with another goal until a costly penalty converted again by Clemens erased the gain.  Poor persisted to end the 5th chukker 6-4 with Newport Women leading.  The Newport Men knew it was do or die as the teams went onto the field for the final chukker.  Clemens led the way to close within one point of the women.  A few near misses kept the crowd on the edge of their seats as the seconds wound down and it looked like the Newport Women would carry the day.  Then, Merrick tied the match just before the final bell, sending it to a half period of Sudden Death overtime play.  The crowd was clearly on the women's side as excited cheers were met with disappointed gasps when the ball was dancing on the line that would give the women the winning point.  The ball went out of bounds as the bell ended overtime, maintaining the 6-6 tie.  Not keen to end the season with a tie, the umpires set up a Penalty Shootout to decide the match. Keating lined up first and easily scored for the women, followed by Clemens for the men.  Poor, Buchanan, Merrick, and Quigley all scored on the penalties to maintain the tie 9-9.  Purdom lined up last for the women, took a steady swing, but the ball went just fractions wide.  It all came down to Souto for the men, who channeled the pressure into the winning goal.  The men hoisted the perpetual cup for the third time in Newport Polo's Battle of the Sexes, hanging on by the thinnest of margins in each win.

The match concluded with the Veuve Clicquot Champagne Toast & Trophy Presentation. Commemorative prizes and the perpetual liberty bowl were awarded by representatives from Turkish Airlines and the Turkish Consulate in Boston. The presentation concluded with the Turkish Airlines Grand Prize Drawing where Martha from Mattapoisett, MA won Round Trip Business Class Airfare for Two to any Turkish Airlines destination. An autograph signing to meet the players followed the trophy presentation. The teams and fans met to celebrate the end of summer with a celebratory Gosling's Dark 'n Stormy™, the National Drink of Newport Polo, to salute the 2019 season at the Davitt Pavilion Patio Bar, at the venue's new après polo destination.

While in Newport, you can enjoy many of the best attractions and highlights that our visiting teams experience, including VIP ground transportation from Rockstar Limo, a tour of Newport with the new Newport Jaguar Tours, an aerial tour from Newport Helicopter Tours; a glorious afternoon sail with America's Cup Charters; sightseeing fun courtesy of Scooter World; paddleboarding with Island Surf and Sport; a special tour of Water Fire courtesy of Providence River Boat Company, angling excursions with Newport Sport Fishing Charters, and tennis on the historic grass courts of the International Tennis Hall of Fame.

Stay current with the 2019 team lineup, latest news, events and more by subscription to our eMagazine (sign up) and get match details from the Gameday Briefing (sign up).  Both subscriptions are private and spam-free.

Minutes from downtown Newport, the International Polo Grounds are located at historic Glen Farm, 250 Linden Lane (off Rte. 138) in Portsmouth, RI. This bucolic setting is the last 100 acres of what was once a 700-acre manorial farm whose settlement dates to the 1600s.  Its classical stone barns from the Gilded Age and its park-like grounds were rehabilitated by polo series founder, Dan Keating, and thrive today as an equestrian & community recreational property, and home of the Polo Series.