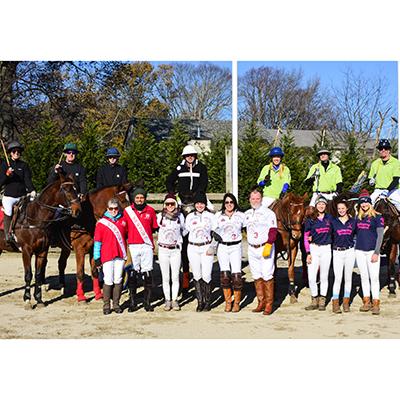 The following day, the teams returned to contest the Consolation and the Championship amid the swirling snow of a wintry New England storm.  The round-robin consolation began with TB Bank taking a one goal win over Kinsella Building.  Then, strong offensive by the junior Galloping Grooms overcame Kinsella Building and TD Bank to take the bronze medal finish.  Finally, the four chukker Championship for the prizes and glory got underway with Synergy Solutions Today against Newport.  Newport set the tone of the match with four goals in a row, plus a penatly conversion to jump to a 5-0 lead.  Synergy Solutions Today slowed the advance but didn't hit its stride until the final chukker.  Newport had already pulled too far ahead to catch, taking the prizes and last bragging rights in the autumn tournament season.

Newport, Rhode Island:  For more than 375 years, Newport has been welcoming visitors from near and far to its charming New England coastal harbor, earning its reputation as America’s First Resort. Evolving from its origins for religious freedom to prominent colonial port to Gilded Age playground to today - a destination ripe with sport, culture, history, art, entertainment and scenic beauty, distinctive shops, renowned restaurants, diverse accommodations, and world-class events, its past, present, and future make this international resort uniquely legendary.