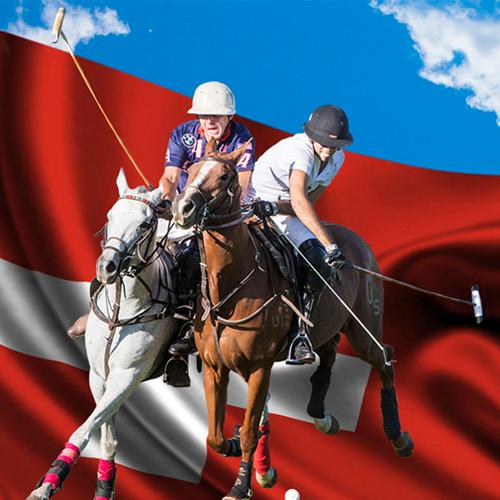 This year, our international team lineup includes the top vote-getters in the first-ever fan survey!  Leading off the Newport International Polo Series 29, with its official debut will be Switzerland on Opening Day, joined by Argentina and South Africa as most popular returning teams. Perennial favorites Italy, Ireland, Jamaica, and England will command audiences during the peak season.  The Dominican Republic brings its vibrant culture and lively rhythms to captivate on the biggest night of the year as guests of honor for the 20th annual International Polo Charity Ball.  Keep reading to learn about polo in each country and get the first look at special event details.  Polo Match and Après Polo tickets go on sale March 15th.

Switzerland adds even more excitement to Opening Day, making its first Polo Series challenge against Team USA on June 6th.  Polo was introduced in St. Moritz where it was played briefly at the end of the 1800s, before returning in the 1960s to steadily gain in popularity.  Today, Switzerland is best known for the annual World Snow Polo Cup.  Its national team is gaining prominence as well with two 4th place finishes in the World Polo Championship.  Hopp Schwiiz!  The Switzerland Polo Team will be the guests of Official Team Lodging Sponsor, The Chanler at Cliff Walk.  Join the teams following the match for a special Après Polo celebration.

Polo powerhouse of the world, Argentina, is the second international challenger of the season on June 20th.  Argentina leads the way as the five-time winner of the World Polo Championship, including the most recent 2017 competition and is known for producing the highest-rated players the world over.  Nevertheless, USA has kept an even record against Argentina in the Polo Series, three wins each and one tie since the first match in 2002.  Expect one of the fastest games all season.  Feast with the teams after the match at an Argentine inspired field-side Asado.

The Italian Polo Team must have touched iron (Italian equivalent to knocking on wood) before the 2019 game, starting a 2-year winning streak.  The recent high-profile win in the European Polo Championship and thrill of hosting a celebrity match with Prince Harry at the Rome Polo Club may have also spurred the team on to a good showing in America.  Italy has the chance to keep the streak going on July 11th when the team from Rome will face USA for the ninth time in Newport.  Following the match, break bread with the teams at the Amici Riuniti Après Polo event.

What more can be said about the Emerald Isle?  The convivial Ireland Polo Team, hailing from Wicklow on the eastern coast, is one of the most anticipated in the season, returning on July 25th.  Whether by luck or skill, Ireland leads 10 wins to 7 against USA in the Polo Series, though if the pattern of alternating victories holds, USA will move closer to an even record.  Toast with the teams Après Polo.  Here's to eyes in your heads and none in your spuds.

From Europe, the world tour follows the trade winds to the West Indies for an extended stay in the New World's first port of call, Dominican Republic, and the social highlight of the polo season, the Bon Voyage Ball.  The star-lit Caribbean fantasy will come to life with influences from the vibrant Dominican culture, including live music, iconic fashion, gourmet cuisine, exotic libations and top deck decor to experience the Caribbean's #1 destination. Then, the teams take to the field the following day for USA vs. Dominican Republic on August 8th.  The idyllic climate means the Dominican players can hone their skill year-round, making it a formidable rival, and attracting players from around the world to do the same. The teams are at an even one win each, with USA defending its 2017 victory.  A finale Lobsterbake Après Polo with the teams will provide a sensational conclusion to the evening.

Carribean escapades continue as the season moves on to Jamaica, another perennial favorite in the annual lineup.  Polo in Jamaica is opening to a new generation of native-born players, often passed down through families.  Expect to see at least one rising Jamaica polo hopeful on August 22nd.  USA will be playing to win after Jamaica sailed off with the perpetual cup last year.  The Jamaican Polo Team will be the guests of Official Team Lodging Sponsor, Hotel Viking. Enjoy a mouthwatering conclusion at the Jerk Grill, Après Polo, serving up authentic Jamaican cuisine.

The quintessential polo nation, England, is next up for the annual Labor Day weekend challenge on September 5th.  Despite reclaiming the perpetual cup last season, England still trails 8 wins to 10 in the Polo Series record.  The current odds are in the Londoner's favor, however.  Bring your bitter and cucumber sandwiches to see the rematch.  Stay Après Polo for the Sailor's Delight Lobster Boil.

South Africa rounds out the season as the final international challenger on September 19.  South Africa had a promising start in the Polo Series, winning its debut match.  Then, USA defeated the team twice, most recently in the 2019 season.  Returning Captain, Selby Williamson, is one of the country's highest-rated players and is sure to put together a winning team that can wrest the cup.  Join the final Après Polo of the season to share in the teams' celebrations and a South African inspired dining experience.

About Newport Polo:  Newport Polo is the home of America's first polo club, founded in 1876, a charter member of the United States Polo Association, host of the Newport International Polo Series summer exhibition matches, and a model US polo club with member services for grass & arena polo and polo instruction year-round.