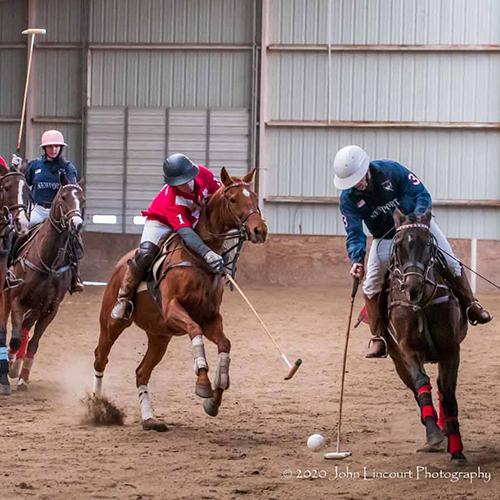 BFF's saddled up in the spirit of Valentine's Day for a good-natured tournament and quality time with polo peeps on Saturday, Feb, 8.  The round-robin format pitted three teams, Bleeding Hearts (navy), Brotherly Love (red), and Baby Love (white) against each other in the afternoon competition.  Teams were anchored by a Newport Polo coach, with polo club members, advanced adult students, and members of the Newport Polo high school and college teams.  As the evenly matched teams faced off in respective rounds of competition, the results were a dead heat with one victory and one loss for each team, deciding the overall winner on gross goals.

The even win/loss record went to net goals for the tiebreaker, which was also even as each win was only by a single point in all three matches.  The next test, gross goals (total goals scored during the tournament), put Bleeding Hearts on the winner's podium by one point.