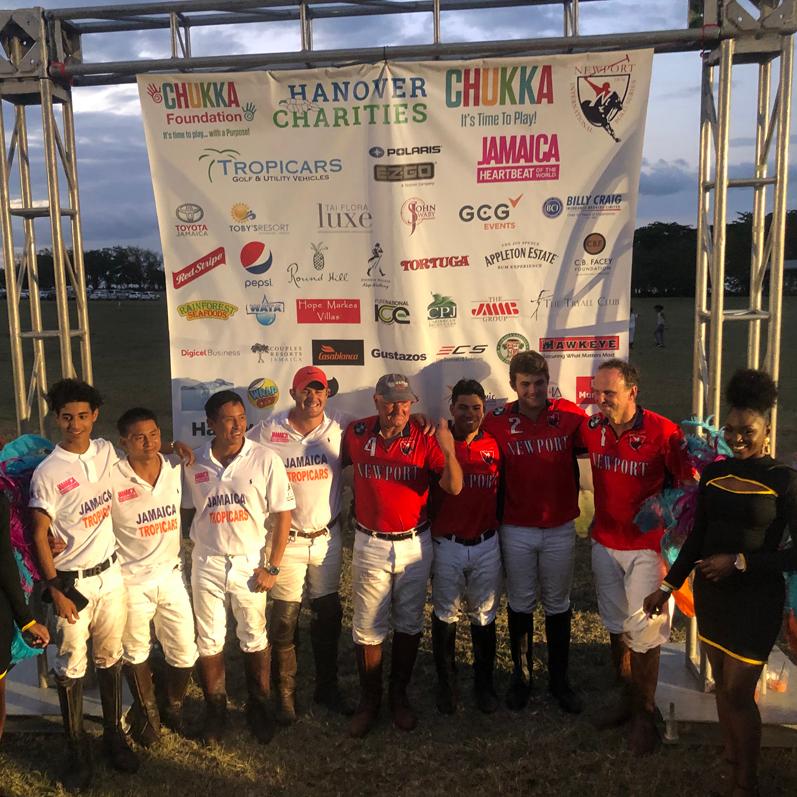 Team USA accepted a challenge to the tropics in February to help support needy causes in Jamaica for a fundraising agenda of events organized by Hanover Charities and the Chukka Foundation.  For over 60 years, one love and philanthropy have converged on the island nation for Valentines weekend, creating one of the most anticipated highlights of the Caribbean calendar, the Sugar Cane Ball and the Chukka-Hanover Charities Polo Match.

Christopher Columbus once described Jamaica as “the fairest land that eyes have beheld”. As its reputation for abundant natural beauty spread, Jamaicans became equally equipped in the art of hospitality.  A visit to the island is a special experience to look forward to again in the future.

Captain Dan Keating led the team, including John Wigdahl, Connor Deal and Pedro Lara to compete in the headline match against Jamaica.

A familiar welcome awaited USA players at team headquarters, Toby Resort in Montego Bay, to begin training for their mission.  Top priorities were to become acquainted with the mounts being lent, and size up the competition during friendship matches on the world renown St. Ann polo field and elsewhere, generously organized by the local polo community.

There also came tests of balance & agility in the waterfalls of Dunn’s River, rituals of chi & immersion while rafting on the Martha Brae, and aquatic exercises at Doctor's Cave, Frenchman's Cove, Blue Lagoon, and Tammy's Cabana Club.  In the evenings, the team was plied with encore birthday dinners, mountain-top retreat buffets, clubhouse gatherings of the fraternal order and observances of local nightlife.  Jamaican hospitality and the ineffable shared experiences included many longtime Jamaican polo comrades, adding to the spirit and camaraderie of the days spent together.

Preparations were deemed successful, as the Newport team and supporters were among the most photographed of the evening and outlasted most of the 400+ on the Round Hill dance floor to close down the 62nd annual Sugar Cane Ball before swimming back to Mobay.

Confidence in hand, USA took to the field the following day in the main event of the Chukka-Hanover Charity Match against Jamaica.  The tented entourage traveled from all points on island and beyond for the 11th annual benefit match.  The match was exceptionally close, as USA's early lead eventually gave way to a crowd-stirring series of lead changes with the favored hometeam brothers Shane and Kurt Chin, Hamish Wates and Zackary Byles. USA's teamwork and determination held the lead in the homestretch with 3 minutes left, only to ignite a Jamaican rally that would tie, then overtake the Americans in the final minute for the likely win, until a tying goal with 14 seconds on the clock ended the battle in a draw, to be continued in the rematch.  Festivities concluded with a trophy presentation, including MVP laurels to USA's John Wigdahl and MID award to Connor Deal at the jubilant reception that followed.

Now more than ever, Hanover Charities’ role in community is crucial.  For more information, visit www.hanovercharities.com.  Hanover Charities has announced its 2021 events, including its annual ball on Feb. 13, 2021.

Click to see an album of photos from the overseas reporter.  Watch the 2020 Sugarcane Ball highlights below.

The ever-popular Jamaican Polo Team will return to Newport on August 22, 2020 for the annual USA vs. Jamaica match followed by the Jamaican Jerk Grill Après Polo celebration during the Newport International Polo Series.  Reservations will open on March 15.

Hanover Charities is the largest non-profit, 501c3 organization in Western Jamaica. Celebrating the Diamond Jubilee in 2017, Hanover Charities has invested millions of US$ to the parish of Hanover in a wide range of projects for its citizens from the very young to seniors. Funds generated from the weekend’s events go towards the foundation’s several initiatives including implementing programs to feed children, the elderly and the indigent, funding health clinics, supporting organizations that promote positive values and education for children, and contributing to scholarships for deserving local students.

The Chukka Foundation is dedicated to achieving immediate and lasting changes to the lives of children, youth and families in their local communities. Empowering through education, scholarships and improving lives and offering our philanthropic support. The Chukka Foundation also promotes responsible and compassionate care towards animal welfare.  Over the past ten years, the Foundation has assisted with offering scholarships, improving classrooms, assisting schools, environmental projects, animal welfare and scholarships for local students.