Tickets on sale for all matches, see Events/Tickets.  COVID-19 Response. 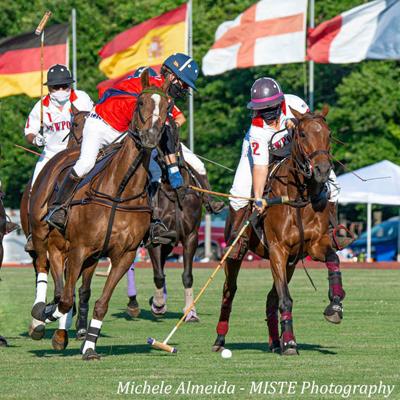 The Davitt Classic entertained a sold-out audience on Saturday, June 20 in the Newport International Polo Series, where spectators for generations have witnessed live polo action on the beautifully restored grounds of the Town of Portsmouth's original gentlemen's farm, established during the Gilded Age during a movement to retreat from the high life into pastoral country acres, which today is mere minutes from the bustling Newport waterfront.

Under a plan of reduced capacity and socially-distanced tables in the Davitt Pavilion and fieldside tailgate picnics, six chukkers of play unfolded across the argyle-patterned emerald green at Glen Farm, home of the Polo Series for the past 28 seasons, in a classic contest of horsemanship and valor, with Newport in red defending against the challenger, Davitt in white, on the summer solstice for an epic afternoon of clear skies and mild conditions that attracted families and friends for a Father's Day weekend celebration.

The only live sporting event in the Northeast fielded Catie Reed at #1, Minnie Keating at #2, Dan Keating at the helm in the #3 and Sam Clemens at #4 playing for Newport, against Davitt's Roger Souto in the #1 position, Margaux Buchanan at #2, Laurel Howe and Dan Kinsella alternating at #3 and Rory Torrey captaining from the back at #4.  Mounted Officials were Patrick Quigley and Sam Shore.

Color commentary was provided by William Crisp, arguably the most highly respected polo commentator in the world.  On hand for the Official Coin Toss following the introductions and the US National anthem, was special guest Dave Whitney, VP General Manager of Davitt Inc - New England's award-winning pioneer design/build firm and industry leader since the 1980’s, credited with the enhancements to the Pavilion & Patio Bar last season, and renown for hundreds of distinctive homes created or restored throughout the Northeast region.  A family affair, Whitney's oldest daughter Grace, age 5, assisted, earning the home team the choice for the starting direction of play.

The opening drive led to Reed's first career goal in the Polo Series, for the home team, followed by a goal from teammate Clemens putting Newport firmly in the drivers seat, sparking the challengers to light up their end of the scoreboard with a scoring drive by Howe, but Clemens kept the heat on with another point for Newport, to end the period leading 3-1.  After horse changes between chukkers, the Davitt side converted a penalty shot for a momentum-shifting point early in the 2nd chukker, followed by Buchanan's field goal to tie the score, but a few plays later Team Davitt made a costly foul, for a free hit at goal scored by Clemens to reassume a 4-3 lead.  D. Keating carried the red tide with 2 goals in the 3rd chukker for an 6-3 Newport stronghold at the half.

Music ensued, dogs were walked and frisbees and bean bags were rediscovered during the halftime intermission, while curio seekers found souvenirs and official apparel in the Pro Shop and signature cocktail carryout from a full menu at the Patio Bar during the halftime intermission.  The teams rode out onto the pitch, signaling the start of the second half.   A rally of goals went back and forth in the explosive 4th chukker, starting with Davitt's Souto, answered by Newport's Clemens converting another penalty shot on goal, but Souto finished another scoring drive successfully for Davitt, only to have Reed score her 2nd career goal on the day, for the 8-5 Newport advantage.  Smelling blood in the 5th period, Newport's D. Keating drove another point home, followed by Reed for the hattrick and Clemens for another penalty conversion point, before Kinsella responded a Davitt goal, to trail 11-6.  Buchanan came out swinging in the final period, scoring for Davitt, but Newport took over from there with 2 more goals from Reed and another from Clemens to conclude the rout 14-7.

The match concluded with the Newport Fan Salute around the perimeter, followed by the Veuve Clicquot Champagne Toast & Trophy Presentation on the Jumbotron, awarding prizes to the victors and a newly minted Davitt silver cup.

Dating back to 1876, the polo matches are one of destination Newport’s unique & most renown traditions, a living legacy from the Gilded Age, and open to the public. Spectator audiences enjoy the contests and festive atmosphere at the picturesque polo grounds, on the 140-year old, restored acreage of historic Glen Farm, where the home team - Newport/USA - meets challengers each season from around the world and as well as teams representing major US cities.

The Polo Series is scheduled to continue for the next 14 weeks, every Saturday in June through September. The schedule of teams is subject to change, as per State mandates in effect at the time, on international travel and Adult Sports.

Safety being a top priority, RI State approved COVID-19 safety measures are in effect at the polo grounds this season including online sales, masks required when not seated, social distancing and greatly reduced capacity.

Newport Polo's unique spectator experience involves Tailgating in a system of assigned seating at its exhibition venue that it developed several years ago on its proprietary website & box office, which provides online reservations for parking spaces around the polo field from which to observe the polo match. Those parking spaces are now separated by safe social distancing to a limited capacity which is a modest subset of its regular audience, to comply with COVID-19 safety measures that have been approved by the State of Rhode Island. The venue also has an outdoor seating Pavilion that has been revised to comply with the State’s guidelines for outdoor seated wait service.  The full details can be found at https://bit.ly/2AZDTGi

Tickets are available online only at nptpolo.com for reserved Pavilion tables, and reserved Tailgates and Chalets (tailgates with a chalet tent), and accompanying adult Lawn Admission. Unassigned Lawn tickets are currently unavailable. Tickets will not be sold at the entry gates to the Polo Grounds.

Additional details and COVID-19 safety measures in effect can be found on the description page of each event at nptpolo.com including self-screening, wearing masks, maintaining 6’ social distancing, hand washing and sanitizing in restrooms. Policies will be updated as the State of Rhode Island releases new regulations.

The polo grounds are located at Glen Farm, 250 Linden Lane, Portsmouth RI. Stay current with the 2020 team lineup & stats, latest news, events, and more by e-scription to the Gameday Briefing (sign up) and weekly eMagazine (sign up). Both subscriptions are private and spam-free.