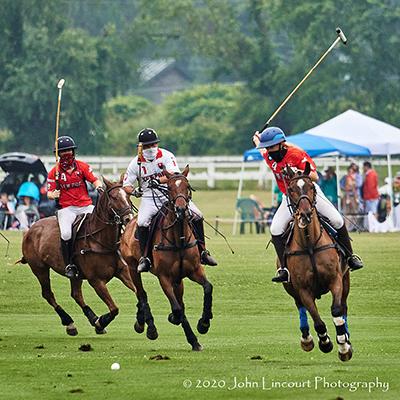 Teams Newport & Stella, and their hearty New England polo fans withstood periods of drizzle leading up to the Official Coin Toss and throw in, to witness 6 periods of play that came down to a photo finish in the final seconds in the Stella Challenge at the Newport International Polo Series on Saturday, June 27.

Spirits were buoyed by the return of the Stella Artois Best Tailgate Contest and creatively curated parties spread around the field, while Pavilion guests enjoyed the all-inclusive amenities of the season's inaugural Modern Luxury Polo Lounge.  Under a plan of reduced capacity with socially-distanced tables in the Davitt Pavilion and fieldside tailgate picnics, six chukkers of polo unfolded.

Representing the home team, Newport was Laurel Howe in the #1 position, Minnie Keating at #2, Dan Keating at the helm in the #3, with Teghan Torrey and Meg Stowe alternating #4.  Challenger, Stella, fielded Roger Souto at #1, with Mia Purdom at #2, Luke Merrick in the captain's position #3, and Sam Clemens closing the back door at #4.  Mounted Official was Patrick Quigley.  Color commentary was provided by William Crisp, arguably the most highly respected polo commentator in the universe.

Captains assembled at centerfield for the Official Coin Toss, presided by Christon Gibson of Newport Living and Lifestyles, a video blog journalist highlighting influencers & lifestyles that make Greater Newport THE vacation destination on the East Coast.  Merrick for Stella lead the first charge, nearly rebuffed in front of goal, but followed through to put the first point on the challenger's board.  Chukker two brought Stella's second goal by Clemens during regular play, followed by a penalty conversion to lead 3-0.  Then, Howe secured Newport's first goal with a close save in the goalmouth.  D. Keating closed the gap further in the third chukker, capitalizing on a Stella foul to end the first half 3-2 in favor of the challengers.

A brief half-time intermission gave Newport the chance to regroup for a strong start in chukker 4 as M. Keating split the posts twice to overtake Stella 4-3.  Clemens for the hat-trick tied the game at 4 all with an impressive goal from outside the 60 yard line, the only point scored in the chukker.  Newport controlled the start of the final chukker, thanks to Howe who broke the tie for a 5-4 lead.  Souto picked up the gauntlet for Stella finishing a drive by Merrick and Purdom to tie that match once again, 5 all.  With less than 40 seconds on the clock, Newport got within striking distance, as D. Keating controlled the ball.  A tough corner cut-shot was propelled through the posts to cinch a 6-5 home team victory.

During the match, the first Stella Artois Best Tailgate Prize of the season was presented by Newport Living & Lifestyles to a couple that set an elegant picnic spread to celebrate their 39th wedding anniversary with their family.  The match concluded with the Newport Fan Salute around the field perimeter.

Dating back to 1876, the polo matches are one of destination Newport’s unique & most renowned traditions, a living legacy from the Gilded Age, and open to the public. Spectator audiences enjoy the contests and festive atmosphere at the picturesque polo grounds, on the 140-year old, restored acreage of historic Glen Farm, where the home team - Newport/USA - meets challengers each season from around the world and as well as teams representing major US cities.

The Polo Series is scheduled to continue for the next 13 weeks, every Saturday in June through September. The schedule of teams is subject to change, as per RI State mandates in effect at the time, on international travel and Adult Sports.

Safety being a top priority, RI State approved COVID-19 safety measures are in effect at the polo grounds this season including online sales, masks required when not seated, social distancing and greatly reduced capacity.

Newport Polo's unique spectator experience involves Tailgating in a system of assigned seating at its exhibition venue that it developed several years ago on its proprietary website & box office, which provides online reservations for parking spaces around the polo field from which to observe the polo match. Those parking spaces are now separated by safe social distancing to a limited capacity which is a modest subset of its regular audience, to comply with COVID-19 safety measures that have been approved by the State of Rhode Island. The venue also has an outdoor seating Pavilion that has been revised to comply with the State’s guidelines for outdoor seated wait service.  The full details can be found at https://bit.ly/2AZDTGi

Tickets are available online only at nptpolo.com for reserved Pavilion tables, and reserved Tailgates and Chalets (tailgates with a chalet tent), and accompanying adult Lawn Admission. Open Lawn Seating is currently unavailable. Tickets will not be sold at the entry gates to the Polo Grounds.

Additional details and COVID-19 safety measures in effect can be found on the description page of each event at nptpolo.com including self-screening, wearing masks, maintaining 6’ social distancing, hand washing and sanitizing in restrooms. Policies will be updated as the State of Rhode Island releases new regulations.

The polo grounds are located at Glen Farm, 250 Linden Lane, Portsmouth RI. Stay current with the 2020 team lineup & stats, latest news, events, and more by e-scription to the Gameday Briefing (sign up) and weekly eMagazine (sign up). Both subscriptions are private and spam-free.