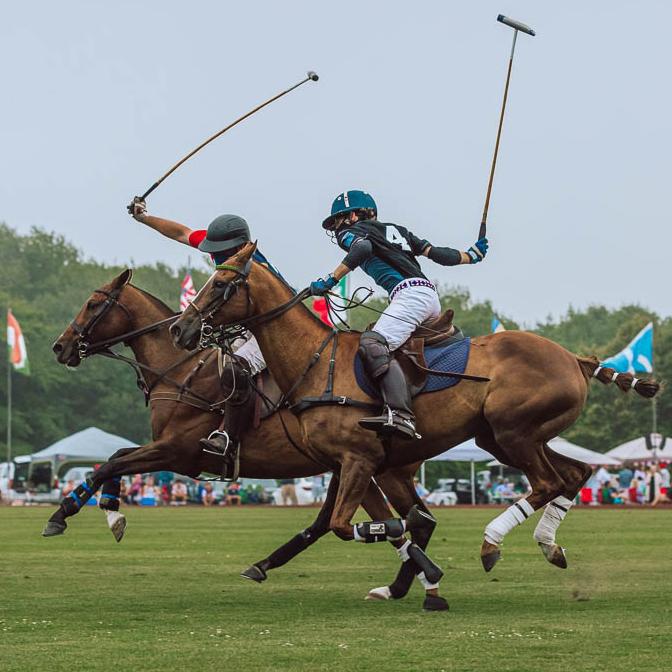 Managing to dodge Tropical Storm Fay, passing sufficiently west of the polo grounds n the overnight hours, polo fans eagerly rekindled their Saturday plans to enjoy one of this season's rare 17 matches, as the Polo Series held its 6th consecutive match, still the only live sporting event in New England since the start of the pandemic.

The Vanderbilt Cup, Presented by Vanderbilt International Properties pitted Gilded Age rivals, the Vanderbilts against the Astors in a 6 chukker duel on the balmy afternoon of July 11th.  Back in the day, the Vanderbilt family were among the earliest players of the new pastime that caught the imagination of Newport's buccaneering class in 1876, when Newport’s summer colony founded America’s first polo club, which to this day is one of the destination's unique traditions & renown attractions.

Rivals in business and New York society, the Astors, Vanderbilts and other notable scions convened annually in Newport for summer retreats.  As leisure & sporting pursuits became the gentlemanly form of one-upmanship, dueling fell out of fashion and several new traditions became mainstays including Polo, Sailing, Tennis, Golf, and eventually automobile racing, among enduring American institutions.  Influencers of their day, they brought about many cultural changes from sports, art, technology and social & political reform, shaping Newport’s rise to prominence to this day as an international seaside sport and resort destination, and one of America's most desirable places to live and work.

Gilded Age themes were among many ideas for inspiration for the Stella Artois Tailgate Contest for the day, back by popular demand as the world's #1 Belgian beer, Stella Artois toasts the most spirited Newport Polo fans each Saturday. Guest judges from Vanderbilt International Properties scouted the perimeter to find the most unique Tailgate, Picnic Patch or Pavilion Table, awarding the coveted prize and Jumbotron moment of fame to a young family with champagne wishes and caviar dreams in matching wardrobe, including their terrior!

Captains assembled at centerfield for the Official Coin Toss, presided by Principal Broker Stacie Mills of Vanderbilt International Properties following player introductions and the US national anthem.  Color commentary during the match was provided by our loquacious authority, William Crisp, the voice of Newport Polo.

In throwback blue jerseys, the Vanderbilts fielded Laurel Howe and Stefanie Boyer alternating in the #1 position, Dan Keating at #2, Dave Bullis at #3 and Sam Clemens in the #4 position.  Donning vintage tri colors, the Astors presented Roger Souto at #1, with Catie Reed at #2, Minnie Keating in #3, and Rory Torrey closing the back door at #4.  Mounted Officials were Patrick Quigley and Perry Markell.

Winning the coin toss, the Astors chose the opening direction of play, and lost no time in their offensive, racking up 4 unanswered points with effective teamwork in the first chukker with a pair of goals by Torrey, M. Keating and Souto for a 4-0 lead at the bell.  In the interval between 7 minute periods of play, known as chukkers, horses were changed quickly and strategies appear to have been deftly realligned by the Vanderbilts who resumed the competition in a more even keel, holding the Astors to only 1 goal by Reed, while Howe scored to put Vanderbilt on the board, trailing 5-1. Defensive tactics continued to stifle attacks on goal, but a skirmish near the Vanderbilt uprights led to a pony goal for the Astors, then D. Keating led a successful breakaway, scoring for Vanderbilt, ending the half 6-2.

A good old fashioned fog rolled in to stay for the duration of the day.  A half-time intermission gave spectators the opportunity to have a socially-distanced and masked stroll across the playing field to replace divots, a time-honored polo ritual that helps restore the field for the second half.  The Italian team that was originally scheduled to compete gave a warm video address on the Jumbotron, promising a 2021 return.  A few Italian classics were played for their fans over the PA, as well as early jazz for the Gilded Age revival theme, and the Italian flag snapped next to Old Glory at centerfield in the line of 34 international flags overhead.

The 4th period was a stalemate as both teams successfully fended off several attacks on their goals, with the Astors retaining their secure lead at the bell. The turning point in the match was the 5th chukker with a Vanderbilt comeback, starting with a penalty conversion by Clemens, offset by a penalty conversion by Torrey, followed by 3 Vanderbilt points including back to back goals from D. Keating and a field goal by Clemens to claw their way back to within a point, heading into the final chukker, 7-6.  Bullis tied the score in the heated 6th period, but Torrey scores next to hang on to the Astor's lead, until Clemens scores to send the match into Sudden Death Overtime, tied 8 all.  The tie breaker came quickly from Torrey in under a minute of overtime play, to win the match for the Astors 9-8.

The match concluded with the Newport Polo Fan Salute around the perimeter, a tradition originating at the Newport International Polo Series in 2003, and now emulated at polo clubs around the world, and the Veuve Clicquot Champagne Toast & Trophy Presentation with representatives from Vanderbilt International Properties awarding the sterling silver Vanderbilt Cup, inaugurated in 2010.

Under a State-approved plan including reduced capacity with socially-distanced tables in the Davitt Pavilion, fieldside Tailgates and Picnic Patches on the lawn from which to view the matches at the polo grounds, sold-out audiences have enjoyed the Newport International Polo Series polo matches every Saturday since Opening Day on June 6, where spectators for nearly 30 years have witnessed the timeless sport unfold across an argyle-patterned emerald green at Glen Farm, home of the Polo Series for the past 28 seasons, in a classic exhibition of horsemanship and valor, with host, the Newport Polo Club, where the home team - Newport/USA - meets challengers each season from around the world and as well as teams representing major US cities and regional rivals.

The Polo Series is scheduled to continue for the next 11 weeks, every Saturday through September. The schedule of teams is subject to change, as per RI State mandates in effect at the time, on international travel and Adult Sports.  Stay current with the 2020 team lineup & stats, latest news, events, and more by e-scription to the Gameday Briefing (sign up) and weekly eMagazine (sign up). Both subscriptions are private and spam-free.

The International Polo Grounds are located on the acreage of Glen Farm, 250 Linden Lane (off of Rte. 138) in Portsmouth, RI. This bucolic setting is the last 100 acres of a pre-colonial settlement from the 1600’s that became the Town of Portsmouth's original gentlemen's farm, an 800-acre manorial estate established during a Gilded Age movement of retreat from the high life into pastoral country acres, that would become the future home of polo in the next century. Its classical 19th century stone barns and its park-like grounds were rehabilitated by Polo Series founder, Dan Keating in the early 1990’s and continue to thrive as an equestrian & community recreational property, and home of the Polo Series.  Minutes from the bustling Newport waterfront, the polo grounds’ proximity to the shore provides a cooling coastal effect for late afternoon polo throughout the summer.