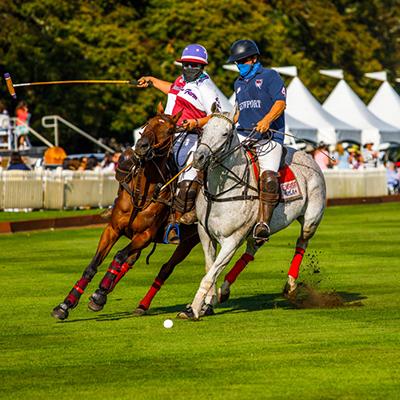 A balmy September day shone brilliantly as players and fans arrived for the Newport Pro-Am on Saturday, September 12, in the Newport International Polo Series.  Challengers from Massachusetts rode south to face the home team, Newport, with each side anchored by a Pro and top regional amateurs to contest the silver prize in the last of three matches in the season.  While the distinct twang of the steel guitar accompanying the country hits soundtrack set the stage for the day, enthusiastic fans embraced the boys of summer, Cowboy, theme, clad in plaid and boots, with rustic picnics and gingham decor.

The teams assembled at centerfield to introduce the players, starting with Massachusetts in red & white uniforms, fielding Peter Freidman at #1, Tim Day at #2, Margaux Buchanan at #4, and the team's pro, Fernando Talavera at #4.  Meeting the challengers for Newport were Dan Kinsella at #1, Stefanie Boyer and Laurel Howe alternating at #2, with Luke Merrick at #3, anchored by pro Rory Torrey.

Following the national anthem, Ashley Erling, executive producer of CBS's The Rhode Show, presided over the Offical Coin Toss to decide the opening direction of attack for the visiting team.  Color commentary during the match was provided by the beloved, William Crisp, regarded as the world authority on polo commentating.  Live video action and instant replays were produced on the polo world's first Jumbotron video wall scoreboard.

Careful tending through the season kept the field in excellent condition as the game unfolded on the argyle patterned pitch.  The first goal came just over a minute into the match from Torrey for the home team.  Talavera evened the score less than a minute later, but two more goals by Merrick put Newport in the lead 3-1, at the end of the first chukker.  Tighter defense kept both sides in check until Torrey broke through for Newport half-way into the chukker.  Massachusetts picked up momentum with goals by Buchanan and Talavera, ending the second chukker with Newport still leading 4-3.  Neither side gained a clear advantage in the third chukker as the minutes ticked down and attempts on goal continually rebuffed.  With half the chukker played, Talavera broke through, followed again by Buchanan to put Massachusetts in the lead, 5-4.

Lawn games were resumed and barbecues reignited during the half-time intermission while some fans took a masked and socially-distanced stroll across the pitch to tread in, or replace the divots made by the horses.  The time-honored tradition helps restore the field for the second half for a smooth surface and faster play.  Ranch Water, the popular Drink of the Day was poured at the Patio Bar in keeping with the Cowboy theme.  Mouthwatering delights from the on-site food trucks were dished up, including handmade pizza, gourmet hotdogs, kettle corn, homemade ice cream, gelato, donuts, and shaved ice.  New limited edition official sportswear was on offer in the fieldside Pro Shop, with new items added weekly alongside the classic collection of teamwear.  Old Glory rippled at centerfield next to the national flag of South Africa in a row of 34 international flags overhead that have participated in former seasons.

After the 20 minute intermission, teams returned to the field, ready to employ newly discussed strategies to take the trophy.  Newport continued its pattern of leading from the outset as Torrey evened the score, 5-all.  Then, Massachusetts turned up the heat with two goals by Day and another from Buchanan in the last minutes for an 8-5 lead.  The fifth chukker brought a Newport shutout as Day and Talavera padded the Massachusetts lead, 10-5.  Neither side could make the goal at the beginning of the final chukker.  Then, 3 minutes in, Merrick overcame the opposition to add a goal for Newport followed by another as the clock ran down.  Day had the final word for Massachusetts though, ending the match 11-7 in favor of the visitors.

The teams took their traditional salutatory lap around the perimeter, giving farewell gestures to the applause of grateful attendees, a tradition originating at the Newport International Polo Series in 2003, and now emulated at polo clubs around the world, followed by the Veuve Clicquot Champagne Toast & Trophy Presentation where the perpetual Liberty Bowl was presented to Massachusetts.

Resident portrait photographer Quison Lawhon captured family gatherings and picnics in Cowboy decor & attire (published online at Cocoa & Co.) in contention for Best In Show honors from Stella Artois awarded by guest judge, The Rhode Show's Ashley Erling, and a chance to grace the party pages of an upcoming issue of Boston Common Magazine, while enjoying one of this season's rare 17 matches, still the only live attended sporting event in New England since the start of the pandemic.