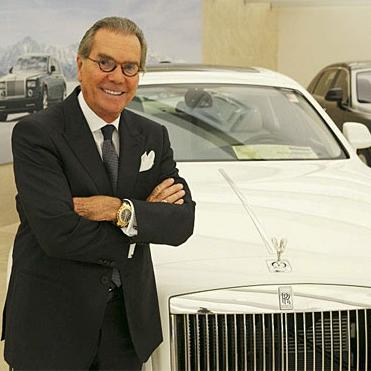 “We have a unique mix of the most luxurious and high performance new and pre-owned vehicles in our Wayland, MA location easily accessed from Boston, Cape Cod, New Hampshire and Rhode Island” says Christine Scott, Marketing Director.

On display in the Exotics Village at the polo grounds during the Finals will be a Lamborghini Huracan Evo Coupe, Lamborghini Urus, Rolls-Royce Cullinan and Bentley Flying Spur.

“While all good things must come to an end, this most challenging of seasons will go out on a high note with plenty of horsepower on and off the field,” explains Dan Keating, Captain and Polo Series Founder.

The match will be witnessed by a live spectator audience in one of this season's rare 17 polo matches, still the only attended sporting event in New England since the start of the pandemic.

The polo matches are one of destination Newport’s unique traditions & renown attractions, dating back to 1876 when Newport’s sporting set founded America’s first polo club, among several other new sporting pursuits that became mainstays in the port city, along with Sailing, Tennis, Golf, and eventually Automobile Racing, as lasting American institutions, shaping Newport’s rise to prominence to this day as an international seaside sport and resort destination, and one of America's most desirable places to live and work.

Combining British traditions of polo, Bentley and Rolls-Royce motor works gives inspiration for a British theme for the weekly Best in Show Contest, as the world's #1 Belgian beer Stella Artois toasts the most spirited Newport Polo fans each Saturday. Special guest judges from Boston Common Magazine will scout the perimeter to find the most festive group of the day, awarding a coveted prize and Jumbotron moment of fame.  Dedicated portrait photography will capture details, to be published on the party pages of Boston Common Magazine, the region's premier luxury/fashion/lifestyle magazine. Souvenir portrait photography by Cocoa & Co. will be available.

Attendees are encouraged to submit door prize raffle entries by the end of halftime, for a chance to win a bottle of Veuve Clicquot Champagne.

Color commentary is provided by William Crisp, arguably the most highly respected polo commentator in the world.  The match will begin with an Official Coin Toss following player introductions and the US National anthem, with a half-time intermission, and conclude with the Herb Chambers Exotics Victory Lap with teams Bentley and Rolls-Royce as they circle the field in the final Newport Polo Fan Salute of 2020, a tradition originating at the Newport International Polo Series in 2003, and now emulated at polo clubs around the world, and the Veuve Clicquot Champagne Toast & Trophy Presentation with representatives from Herb Chambers Exotics awarding the silver Liberty Bowl, a Paul Revere replica and symbol of New England.

Under a State-approved plan of reduced capacity with socially-distanced seating in the Davitt Pavilion, fieldside Tailgates and Picnic Patches on the lawn from which to view the matches at the polo grounds, sold-out audiences have enjoyed the Newport International Polo Series polo matches every Saturday since Opening Day on June 6, where spectators for generations have witnessed the timeless sport unfold across an argyle-patterned emerald green at Glen Farm, home of the Polo Series for the past 28 seasons, in a classic exhibition of horsemanship and valor, with host, the Newport Polo Club, where the home team - Newport/USA - meets challengers each season from around the world and as well as teams representing major US cities and regional rivals.

Safety being a top priority, RI State approved COVID-19 safety measures are in effect at the polo grounds this season including online sales, masks required when not seated, social distancing and greatly reduced capacity.  The full details can be found at https://bit.ly/2AZDTGi