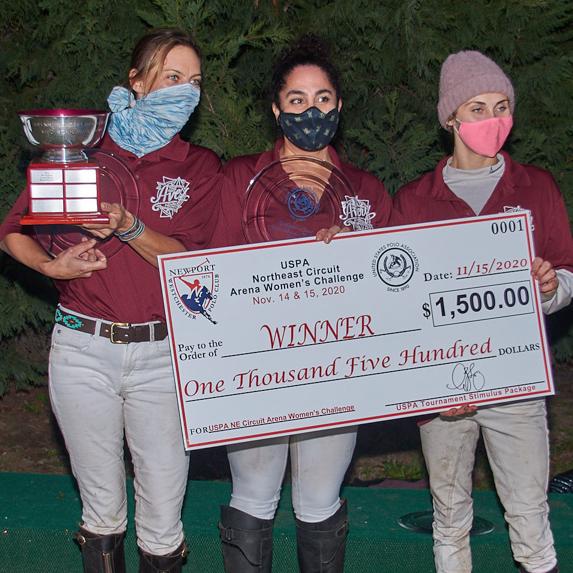 The 2nd annual USPA Northeastern Circuit Arena Women's Challenge (5-7 goal) tournament called out the highest level of competition for women in the Northeast this year, as four teams of players in peak form assembled to compete for $2500 in USPA prize money and winners' laurels over two days of competition in ideal Autumn conditions during the weekend of November 14-15, 2020.

With USPA Umpire Juan Carlos Gonzales officiating the tournament, the Semifinal round matchups resulted in narrow but decisive victories for Newport over Blonde Ambition, while The Avery's win over Dizzy Mares was decided by a penalty shootout in overtime.  All four teams ratcheted up the competition on the second day, when the finalists included defending champions from last year, on opposing teams this time around, to add to the excitement that ultimately played out in favor of The Avery as the 2020 champions.

Semi-Final Game 1 kicked off the tournament on Saturday, with Newport (Amy Garrison, Catie Reed, Mia Purdom) in red team colors against Blonde Ambition (Suzanne Duncan, Meg Stowe, Ula Green) in gold/navy.  Newport started with 1 handicap goal on the board to level their prospects, but Blonde Ambition quickly overcame the deficit as well as repeated tying goals by a relentless Newport, to maintain a 1-point lead in the opening chukker, 4-3, then padded the lead to 2 points by halftime, 6-4, but Newport's endurance in the 3rd chukker outlasted a heated sparring of goal-for-goal that ended with 3 unanswered Newport goals to close out the period ahead, 9-8, until an ambitious 2-pointer by the Blondes in the final chukker reasserted the lead for a final time, unleashing a 4-goal battery by Newport for the 13-11 win, advancing to the Finals.

Semi-Final Game 2 was equally exciting with Dizzy Mares (Simone March, Ryan McNeilly, Hannah Cope) in blue/black facing off against The Avery (Touba Ghadessi, Rebecca Nordstrom, Minnie Keating) in maroon jerseys. With a handicap point on the board to balance the strength of their rivals, The Avery padded their lead in the opening chukker with a pair of field goals against a penalty conversion point for Dizzy Mares, to lead 3-1, adding 3 more points in the second chukker before Dizzy Mares answered with 3 goals of their own to trail by only 6-4 at the half, then tied the score in the 3rd chukker, 6-6, before The Avery went ahead by 2 goals in the heated 4th chukker, but Dizzy Mares fought back into the lead with 3 points, including a 2-pointer, until The Avery's tying goal led to an overtime double shootout, with The Avery winning a berth in the Finals.

Consolation Round opened the second day of competition for 3rd Place between Dizzy Mares and Blonde Ambition.  With both teams evenly matched in handicap, the Mares broke out to an early 3-1 lead, but the Blondes battled back in the 2nd chukker to level the score, igniting an exchange of goals to trail 6-5 at the half, then subdued the Mares in the 3rd chukker while adding 3 more goals to take an 8-6 lead, and never looked back, as Blonde Ambition kept the pressure on with 2 more points to the Mares 1 in the final chukker, resulting in a 3rd Place finish for the aptly named Blonde Ambition.

Final: All the glory was on the line as Newport and The Avery lined up for the opening throw-in of the Championship. With equal handicaps, The Avery's strategy became apparent in the 1st chukker to assert itself with an early lead, 5-1, but Newport chipped away at the gap to trail 7-4 at the half, then maintained stride, goal for goal with The Avery in the 3rd chukker, 9-6, and continued fighting through the last chukker despite The Avery's 2 goals for every goal by Newport, setting the stage for an exciting rematch in the future, as The Avery finished with a thrilling 13-8 title victory.

Following the Championship Round, the Host Club's David Markell, Polo Manager, presented cash prizes of $1,000 to Runner Up - Newport, and $1,500 to Champions - The Avery, along with winner's prizes and the perpetual trophy, while Mia Purdom was named MVP and Catie Reed's 2nd chukker horse Jack, owned by Dan Keating, was voted Best Playing Pony.  The winners will have a page in the USPA yearbook and names engraved on the perpetual trophy.

“It is exciting to round up the best women competitors in the Northeast for an Autumn arena showdown to add to a miraculous season of polo, and raise the stakes with $2,500 prize money!” remarks Leighton S. Jordan, USPA Northeastern Circuit Governor.

“2020 is concluding on a high note with great tournament competition, and it was exciting to host the best of the Northeast during the Autumn arena polo season,” adds Dan Keating, Club President and USPA delegate.

Prize money and support for the tournament including professional umpiring and trophies was generously provided through the 2020 Tournament Stimulus Program from the United States Polo Association.  The USPA Northeast Circuit Women’s Arena Challenge tournament was also hosted at Newport Polo in 2019.

Newport Polo’s indoor and outdoor arenas are state of the art, regulation size polo arenas, with reliable footing for fast, competitive polo.  The tournament, which has a maximum field of 6 teams, is well suited to the Northeast, a region renowned for a concentration of arena polo competitors.