Matches are being opened day-by-day.  Sign Up for Tailgate / Chalet / Pavilion availability alerts. 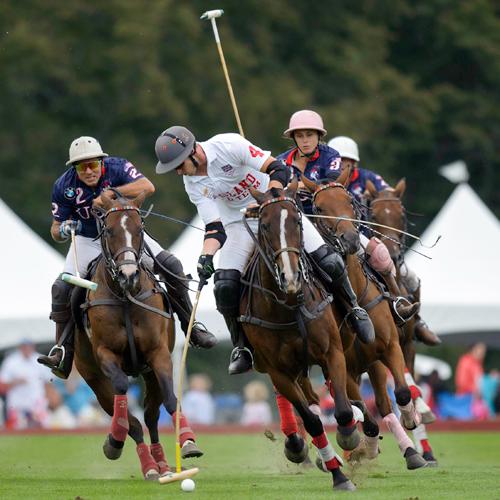 Alarm signals sounded throughout New England as the annual tide of English invasion swept in to challenge USA on Saturday, September 2 in the NBC-10 Newport International Polo Series, presented by BMW.  A red helicopter of Bird’s Eye View Helicopter Tours descended on the Polo Field, bringing in the General and his top gun to join the team England sent to break USA’s two-year winning streak.

Defending for USA was Charlie Bullis at #1, Michel Nseir played #2, Minnie Keating was at #3, and at back was team captain Dan Keating.

The English invasion got off to a slow start as USA advanced to an immediate lead with goals by M. Keating, Bullis, and Nseir.  The Brits came alive in the second half of the chukker, with goals by O’Kane and Wood for a suspenseful 3-2 USA lead.  USA continued to push the line through the second chukker with goals by Bulls and D. Keating while rebuffing any British advances.  The Americans maintained their hold in the third chukker, padding it with a gaol by Bullis, but England did not break rank, adding two goals by Wood to cinch the gap, trailing 6-4 at the half.

The second half opened as a redux of the third chukker with Bulls putting up another point for USA, but two goals by O’Kane and Wood brought England within striking distance.  At the start of the fifth, Wood let slip the dogs of war, unleashing a torrent of 4 goals.  D. Keating pushed back with a goal for USA, but England assumed a 10-8 lead as the teams left to change their horses for the final chukker.  An impressive duel unfolded as England pushed hard to maintain its lead while USA’s defense was put to a tough test.  A goal by Tarnowski and two by Wood for England were met by two from Bullis for USA.  As the final bell rang out to end the contest, England dealt the most blows for a 13-10 win.

During the match, a magnum of champagne from Veuve Clicquot was awarded to one lucky fan from North Hampton, New Hampshire in the weekly door prize drawing.  A royal appearance, patriotic display of the Union Jack, a few tartan touches, and the TARDIS chauffeured for the day won tailgaters in space 27 the best tailgate picnic truck from Stella Artois.

Following the match, the teams took to the podium for the Veuve Clicquot Champagne Toast and Trophy Presentation, where Charlie Bullis (scoring 6 goals for USA) and Jimmy Wood (scoring 10 goals for England) were named as top players of the match.  Coca, loaned by D. Keating was named by Best Playing Pony by the English players.  Elijah Duckworth-Schachter of RIB & RHEIN x New & Lingwood presented the USA vs. England perpetual Liberty Bowl to the victorious English.

Co-sponsors, RIB & RHEIN x New & Lingwood, partnered to form a luxury American specialty store in Newport Rhode Island and renowned as an arbiter of modern style. From the day its doors opened in 2008, the purpose of this retail concept has always been the same: to be the first and only choice for the most discerning consumers, the consumers with the highest expectations. More about RIB & RHEIN x New & Lingwood...