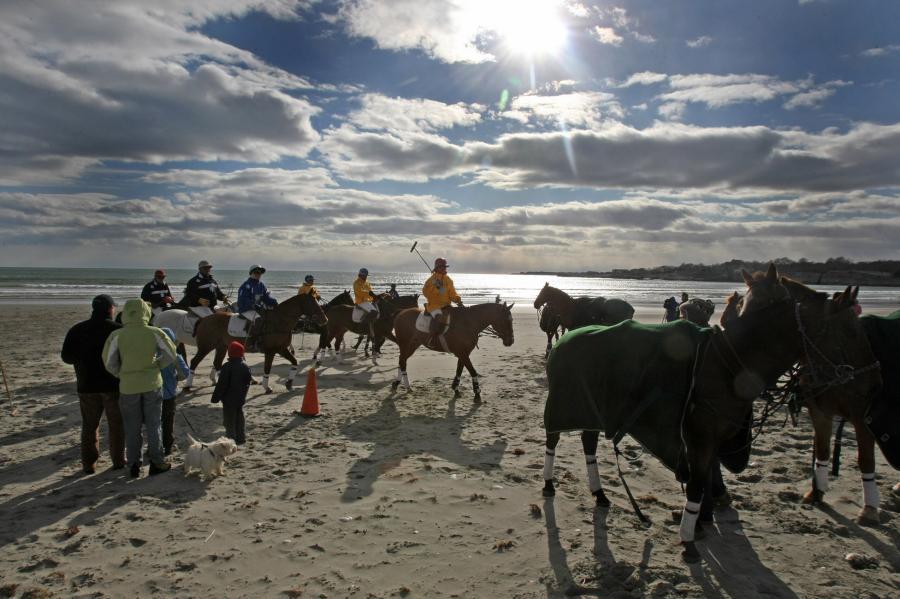 Back by popular demand, Newport Polo is pleased to host its fourth annual Beach Polo on Feb. 23 & 24 at noon on both days.

The fourth annual exhibition polo event is a highlight of the annual Newport Winter Festival, and will take place at Easton’s Beach (aka 1st Beach) at 175 Memorial Boulevard in Newport, RI.  Directions.

“This event is a nice attraction for our beach during the winter season,” explains Eric Reis, Newport Beach Manager.  All regular off-season beach rules and restrictions will be in effect.  Parking is available at no charge at the parking lots for Easton's Beach.

Beach Polo, organized by Newport Polo, will feature 2 teams competing each day in a match composed of 4 periods of play, 7 minutes per period.  In between periods, the players change to fresh horses.  In total, each match will have duration of about 1+ hour at low tide.  Spectators are encouraged to witness the fast-paced contests and cheer on the teams, playing on finely tuned thoroughbred mounts.

“The Newport Polo Club is grateful to the City of Newport for its blessing, and to all who make this event possible so that people of all ages can get outdoors to take in the fresh air and spectacle of horsemanship and breath-taking panoramas on Newport’s beautiful beaches when the ponies and players put on a polo match on the sand,” adds Dan Keating, captain and president of Newport Polo.

Beach Polo is a low-impact, eco-friendly exhibition that will feature two teams mounted on thoroughbred polo horses and competing in a 4-chukker match on the sand in the intertidal area of the beach, beginning around noon in conjunction with the event schedule of the 25th Newport Winter Festival.  The players are from the Newport Polo Club, (including the nationally ranked (3rd) Newport Interscholastic Girls Team that is headed for the US National Championship next month.)

Polo is one of the most popular attractions and oldest traditions in Newport, the home of the first polo club in America, dating back to 1876.  The beloved tradition continues on Saturdays throughout the summer with the Newport International Polo Series, whose 22nd season kicks off on June 1, 2013 through the end of September.