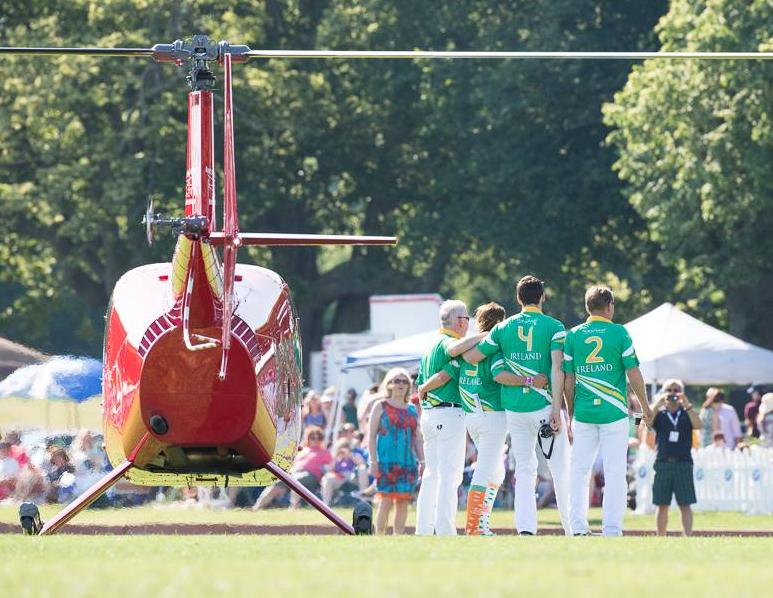 Making it's 23rd consecutive appeareance in the NBC-10 Newport International Polo Series, presented by BMW, the luck of the Irish followed the Irish Polo Team to Newport as they defeated USA 12 to 11 in the final minute of the 6th chukker.

Team captain, Dan Keating opened the match with a swift goal for USA, followed by two more scored by Heather Souto. On unfamiliar ponies that they had not ridden before the match, the Irish team came back for the second chukker ready to put up a fight. Holding USA to their 3 goals, Shiobhan Herbst and Dan Laverty went on the attack for Ireland and scored a goal each. Peter Friedmanscored another goal for USA, but by half-time, Ireland took the lead with two goals scored by father, Eamon Laverty, and one buy his son, Dan Laverty.

Minnie Keating sought to even the score in the fourth chukker, scoring two goals for USA. Dan Laverty put one between the posts for Ireland, tieing the match at 6 all. Each team posted two more goals in the 5th chukker for a tied score of 8 all.Heather Souto and Dan Laverty went tit for tat through the beginning of the sixth chukker, raising the score to 10 all. Dan Keating broke though the Irish defense and won another goal for USA, making the score 11 to 10. It was Dan Laverty, the high scorer of the day, who tied the match again, then score the winning goal forIreland just as the final bell sounded.

BMW brought a fleet of its newest models to the polo grounds this week, including its first all electric vehicle. Spectators were invited to take a test drive from 1 - 4pm in and around the polo grounds.

This week's Massage Envy door prize went to a lucky winner from Portsmouth. The top secret tailgat judge found a patriotic display in space 21 which took the best tailgate prize provided by Hangar 1 Vodka and the International Tennis Hall of Fame. After 6 periods called chukkers, the 2-hour match concluded with the Veuve Clicquot Champagne Toast & Trophy presentation of the perpetual USA vs. Ireland cup, inaugurated in 1992, and naming of the 'Best Playing Pony,'Fugativo, owned by Dave Bullis. The festivities continued with the annual Asado Lamb Roast in honor of the Irish Team.

During their visit, the Irish team made Pearls Boutique Hotels their headquarters, and also enjoyed America's Cup Charter sailing, paddle boarding - courtesy of Island Surf & Skate, tennis at the International Tennis Hall of Fame, helicopter tours with Birds Eye View Helicoptour Tours, Newport mansion tours and a team dinner at the one and only Clarke Cooke House for a truly memorable visit to the City by the Sea.