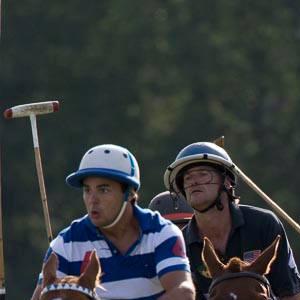 Spectators gripped the edge of their seats as a last second tie ended with a USA victory over Scotland for the third match in the NBC-10 Newport International Polo Series, presented by BMW. Ridding in on last year's victory, the Scotish team made its 11th appearence in the series on June 21, 2014.

Satruday was a family affair at the International Polo Grounds as Jeff Swanson, son Alex Swanson, along with brothers Ed and Giles Bromley-Martin took to the field for team Scotland. Playing for USA were, Dave Bullis, and Chip Steigler, with father-daughter duo Dan and Minnie Keating.

In a strong opening, team USA was leading by half-time with a score of 6 to 4. The first three chukkers were just a warm up for Scotland, and they came back fighting to tie the score at 7 all by the end of the fifth chukker. Adding one more goal, it looked like USA had won as the clock ran down to the end of the sixth chukker. The Scotts were not letting USA off though. A break away play in the last 30 seconds saw the Scotish team post a final goal, tieing the game at 8 to 8. The final bell sounded, ending the sixth chukker in a draw. Umpires Ted Torrey andJim D'Angelis convened, deciding on a penalty shoot-out from the forty yard line to break the deadlock. With a straight and true shot that just had the legs to split the posts, Dan Keating made the final goal for a USA victory of 9 to 8. Dave Bullis was the high scorer of the match; Giles Bromley-Martin was acknowledged as MVP by comentator and long time player, William Crisp.

At the trophy presentation and champagne toast, Cocoa, a seven year old throughbred from Dan Keating's string was given best playing pony by the Scottish team.

"That was team Scotland's way of gaining their own win from the match," saidKeating. It was just two weeks ago when Coca made a sudden leap from the ball during USA vs. Sweden leaving Dan center field without his mount.

A patron from Millville MA took home the weekly door prize from Massage Envy. The lucky spectators in space 29 won Best Tailgate, sponsored by our friends atHangar 1 Vodka and The International Tennis Hall of Fame. The 2-hour match concluded with the Veuve Clicquot Champagne Toast & Trophy presentation of the USA vs. Scotland silver perpetual cup inaugurated in 2004, naming of the Best Playing Pony, autograph signing and cocktail hour to mingle with the players.

During their visit, the Scottish team also enjoyed sailing with America's Cup Charter, paddle boarding - courtesy of Island Surf & Skate, tennis at the International Tennis Hall of Fame, helicopter tours with Birds Eye View Helicoptour Tours, Newport mansion tours and a team dinner at the one and only Clarke Cooke House for a truly memorable visit to the City by the Sea.