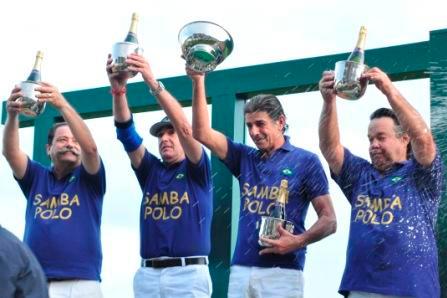 The Brazilian team demonstrated its prowess and seniority on the polo field on Saturday, Sept. 17th after defeating USA 11-6 after six regulation chukkers.

Hailing from the Sao Paulo region, where the largest concentration of polo is played in Brazil, were veteran players Jose Castejon at #1, Rodolfo Curbelo at #2, Luiz Matarazzo at #3 and Marcelo Junqueira at #4, whose combined skills would have qualified them for the US Open Polo Championships at the height of their handicaps.

"The Brazilians caught us unexpectedly.  They demonstrated great team skills and experience for which we did not have an equal response.  We can't wait to invite them back for a rematch next year.  I'll be studying the tape all winter, " admits USA captain Dan Keating, playing in the #3 position.  Rounding out the USA squad were Peter Friedman and Dennis Mikolich alternating at #1, Heather Rasulis at #2, and Dave Bullis playing back in the #4 position.

USA's Rasulis put the first point on the scoreboard in the opening chukker by converting a Penalty 2 , which was eventually tied by Matarazzo's field goal to end the first period even at 1-1.  In the second chukker, USA's Bullis converted a Penalty 3, to take the lead again, but Castejon tied it up with a field goal at 2-2.  Bullis's field goal in the 3rd period assumed the lead again for USA, but then the flood gates opened for Brazil with a 4 goal rally, made up of goals by each team member (Penalty 2 converstion by Matarazzo) to end the half with Brazil enjoying a comfy 6-3 advantage.

Opening the second half, USA held Brazil to a single point in the 5th chukker by Matarazzo, but the margin increased to 7-3.  To much applause, USA showed renewed life with a goal by Bullis in the 5th period, but Brazil flexed its muscles again with a 4-goal barrage by Curbelo, Matarazzo and Junqueira (2, including a Penalty 2 conversion) to end the period with a commanding 11-4 lead.  In the final period, USA's Rasulis and Bullis (Penalty 2 conversion) chipped away at the deficit but it was too little too late, as the Brazilians earned the silver prizes with an 11-6 victory.

After gladhanding the audience with a high-five victory lap around the sideboards, a champagne trophy presentation sponsored by Enterprise Rent-A-Car concluded the event, awarding the winners silver coolers of Champagne Nicolas Feiullatte and the inaugural USA vs. Brazil perpetual revere bowl.  The Best Playing Pony was Do-Si-Do, a bay thoroughbred mare owned by Peter Friedman.

An autograph signing and cocktail hour with the players ensued.  The weekly door prize drawing went to a very lucky fan from Peabody, MA, who took home an italian leather weekend bag from Terrida.

To view a slideshow or photos from the match, visit the website of Susan Choquette.