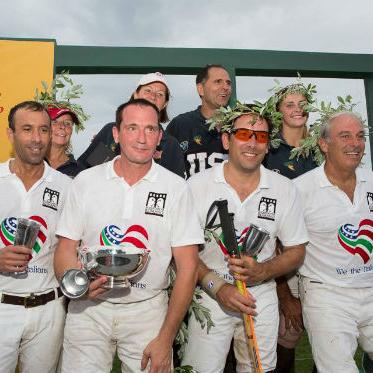 Hailing from Rome, home of the oldest of Italy's 15 polo clubs, the Italian team returned for a third year to play in the NBC-10 Newport International Polo Series presented by your Rhode Island BMW Centers. In the stiffest defensive match of the season, USA edged Italy for a one goal victory.

Defensive plays dominated the game as the evenly matched teams took to the field. Control of the ball was in constant flux as each team neared goal, only to be rebuffed by the defending players. Finally, Mateo de Paolis's determination won a goal for Italy before the end of the first chukker. USA turned up the heat for the second chukker with an opening goal by Michel Nseir, followed by another from Bridget Torrey. Matteo de Paolis sought to end USA's newfound advance, again scoring for Italy, but Minnie Keating ended the second chukker with another goal for USA. Matteo de Paolis continued Italy's attack in the third chukker, starting a goal-for-goal streak between the teams. Bridget Torrey matched the Italian goal, but Marco Elser stepped in to score again for Italy. Minnie Keating answered with a goal for USA but Elser evened the score to 5 all by half-time.

An onslaught from Bridget Torrey (2 goals), and Michel Nseir (1 goal) decided the outcome in the fourth chukker as USA raised the score, 8 to 5. Marco Elser tried to make up the lost ground with a goal in the fifth and sixth chukkers, but unwavering defense from USA repelled the advancing Italians for a final score of 8 to 7.

This week, fans were treated to a stunning performance by Rhode Island's own Joe Cantone who performed the Italian and American national anthems. One lucky spectator from North Providence won the door prize, a gift card from Massage Envy. A fabulous party complete with silver goblets and perfectly restored vintage cars won the best tailgate prize package from Hangar 1 Vodka and the International Tennis Hall of Fame.

After 6 periods, called chukkers, the match concluded with the Veuve Clicquot Champagne Toast & Trophy Presentation of the USA vs. Italy Cup inaugurated in 2012. Guest of Honor, Miss RI Italia crowned each of the players with olive wreaths, a prize for athletes since the first Olympic Games that symbolizes exceptional form and endurance. John Olinger, President of Rockstar Limo, joined Miss RI Italia to present the winning team USA with the USA vs. Italy Cup. Tinkerbell, loaned to Marco Elser by Peter Friedman, was crowned the four-legged hero and given the Best Playing Pony blanket.

While in Newport, the Italian team was treated to celebrity service by Rockstar Limo while hanging out in Newport's legendary mansions, and fine dining and dancing at The Clarke Cook House. America's Cup Charters took the team aboard the 1962 12 meter yacht, Nefertiti, for a sail in Narragansett Bay. The Italians also enjoyed a trip with Bird's Eye View Helicopter Tours and relaxed at the International Tennis Hall of Fame.