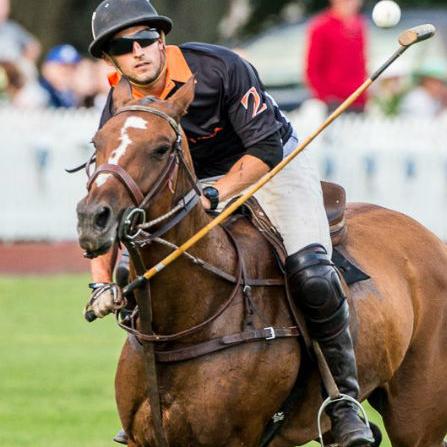 Alison Patricelli kicked off the action with a swift goal to open the first chukker. Palm Beach was on a roll from there with a goal from Mike Giordano and two by Luis Galvan. Jim DeAngelis rallied for Newport, putting them on the score board with one goal. Coming back for the second chukker, Newport needed to halt the Palm Beach advance. Luis Galvan broke through the lines to score for Palm Beach, but Jim DeAngelis quickly turned Newport to the attack and scored. Incresed defense wasn't enough to stop Alison Patricelli who drove another goal home for Palm Beach, followed again by Luis Galvan. Trailing by 6 goals, Newport had some serious work to stop the relentless charge from Palm Beach. Their new strategy worked, limiting Luis Galvan to one goal, with Dan Keating scoring another for the home team to end the first half 9 to 3.

Newport pushed back the Palm Beach storm, doggedly marking the players and making fierce plays at goal in the second half. Newport shut the door on Luis Galvan, making his only goal in the fourth chukker his last. Jim DeAngelis continued to make up ground for Newport, scoring their only goal in the fourth chukker. Chip Steigled his way to the last Palm Beach goal in the fifth chukker, but Christer Still and Jim DeAngelis continued Newport's advance. The red glow of the score board showed Newport down by 5 goals going into the final chukker. Jim DeAngelis made two successful runs at goal. The rest of Newport fended off the fearsome Palm Beach players. But, it wasn't enough. At the final bell, Palm Beach still led by 3 goals for an 11 to 8 victory.

A fan from New Hampshire took home the awesome door prize from Massage Envy. Tailgaters brought holiday spirit to the match which the top secret tailgate judge said, "had to be the winner!" A Christmas tree with all the trimmings and festive hats stood out in the crowd and won the Best Tailgate Prize Package from Hangar 1 Vodka and a custom Newport Polo Series tailgate table. At the Veuve Clicquot Champagne Toast & Trophy Presentation, director Paul Deroach of the Providence Chamber of Commerce was joined by Steve Knaughten of Oppenheimer & Co to congratulate Palm Beach on their win.