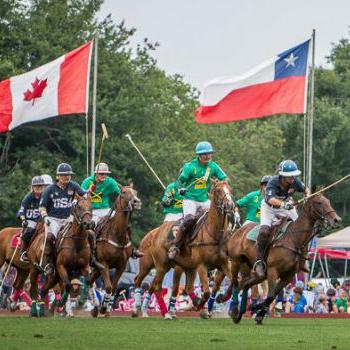 Jamaica made a splash on Saturday, August 16th at the NBC-10 Newport International Polo Series, presented by your Rhode Island BMW Centers. It was a seat gripping, standing ovation finish as a 6th chukker tie ended in penalty shootout and victory for USA.

Old friends returned to play for Jamaica, including Shane Chin making his 9th debut along with Jordan Samuda. They brought fresh faces to breathe new life into an old rivalry with Jonathan Hew, and  Hamish Wates. USA was made up of team veterans, and top players to match the skill of the Jamaicans. Taking to the field were Heather Souto, Dave Bullis, Dan Keating, and Jonathan Kaye.

Jaimaica started the scoring when Hamish Wates made a series of field devouring shots that put the ball straight through the USA goal. But, Heather Souto was just getting warmed up, making two fierce plays that put USA in the lead to end the first chukker. Souto continued her driving plays, winning another goal for USA, until Hamish Wates matched her two goals in the first chukker, ending in a 3 all tie. Jonathan Kaye brought USA into the 3rd chukker, but Shane Chin got in on the scoring action with two goals quickly followed by another from Hamish Wates. Dan Keating evened up the score to 6 all, but Hamish Wates snuck in one more goal before the bell ended the first half at 6 to 7 in favor of Jamaica.

Two goals from Dave Bullis brought USA briefly into the lead starting the second half. Hamish Wates evened the score, and Shane Chin put Jaimaica in the lead with a perfect penalty shot. Heather Souto tied the game again in the beginning of the 5th chukker, and the lead changed twice more thanks to Bulls, Keating, and Chin. Jordan Samuda made his first goal of the match, tying the game at 11 all to end the 5th chukker. The 6th chukker was gripping as Chin got the first goal on a penalty, followed by a goal from Bullis in regular play. Keating put USA in the lead during the final minute, but another straight and true penalty shot by Shane Chin tied the match as the clock ran down.

The crowd was buzzing as the number one for Jaimaica, Jonathan Hew lined up for the first penalty shot. A near miss, and then a goal by Dave Bulis gave USA a little breathing room. Hamish Wates sent a beautiful shot that easily split the posts, while Heather Souto gave the announcer a small panic attack as her shot just landed inside the posts. Shane Chin, who made all six of his in game penalties effortlessly made another, tying the score at 15. Dan Keating could feel the pressure from the crowd, but it didn't do enough to throw off his swing, sinking another USA goal. It was down to the number 4s as Jordan Samuda lined up for Jaimaica. A beautiful shot tied the game again at 16, and it all came down to Jonathan Kaye. A roaring crowd jumped to its feet as the consistent Kaye made a neat goal to finish the match in a 17 to 16 victory for USA.

USA team captain Dan Keating was, "thrilled to play such an intense game against top players from all three of the Jaimaican polo clubs, and to avenge last year's defeat."

The Jamaican team enjoyed the hospitality and amenities of their official team headquarters at the Hyatt Regency Newport, where 360 degree water views, a swimming pool, restaurants and Stillwater Spa pampered the team with unique spa services like outdoor massage, wet room with a Vichy shower, a dry eucalyptus sauna and a full-service salon.

This week's gift card from Massage Envy traveled home to Boston with its winner, and a beautifully appointed living room in the middle of the polo field won the best tailgate prize package from Hangar 1 Vodka. Keith Chouinard and Kristina Galley of the Hyatt Regency Newport joined the players to give away the trophies and the USA vs. Jamaica perpetual cup, inaugurated in 1994. Tobby generously loaned by Christer Still was honored as best playing pony. The superb evening concluded with an authentic Jamaican Jerk Grill dinner with the players.

During their visit, the Jamaican team also enjoyed America's Cup Charter sailing, paddle boarding - courtesy of Island Surf & Skate, tennis at the International Tennis Hall of Fame, helicopter tours with Birds Eye View Helicoptour Tours, Newport Mansion tours and a team dinner at the one and only Clarke Cooke House for a truly memorable visit to the City by the Sea.