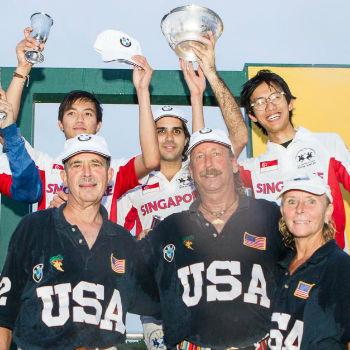 It was history in the making as the first all-Singapore polo team to compete on foreign soil made its debut in the NBC-10 Newport International Polo Series, Presented by Your Rhode Island BMW Centers. A calculated start gave way to a torrent of scoring when Singapore pulled ahead in the second half, to win the inaugural silver trophy, 11 to 8.

Hailing from the Singapore Polo Club, with a polo history nearly as long and storied as Newport's, Han Chia Sheng at #1, Ameer Jumabhoy playing #2, Rooney Kai Ang in the captain's position at #3, and Imran Jumabhoy playing #4 took to the field in white & red jerseys for Singapore. Playing for USA were Stephanie Still taking the #1 position, Peter Friedman at #2, club president and team captain Dan Keating playing #3, and tJonathan Kaye playing back.

Still started with an opening drive, making a stellar run to goal, effortlessly putting USA on the board. A. Jumbahoy rallied his team, sending a beautifully lofted shot which split the posts. USA continued to pull ahead though, as Freidman popped the ball in through a tangle of horses' legs, and Keating converted a 40 yard penalty to another goal. A. Jumbahoy had the last say with another Singapore goal to end the first chukker 3 to 2 in favor of USA.

The even matchup continued as the two teams went goal for goal in the 2nd chukker. Keating started USA with the upper hand for a two point lead, but I. Jumbahoy turned a defensive play into an attack and subsequent point for Singapore.  Friendman won another goal for USA, but a costly penalty converted by A. Jumbahoy and another goal by I. Jumbahoy stemmed the tide as Singapore tied the score at 5 all.

A mostly-defensive 3rd chukker allowed one goal by Ang to give Singapore a halftime lead of 6-5.  Ang and I. Jumahboy combined for massive shots, and clever manuevres in the 4th period, racking up 3 goals by Ang, and 2 for I. Jumabhoy. Kaye managed a single goal as Singapore dominated the field, opening a gap 11 to 6.

USA managed to contain Singapore through the 5th and 6th chukkers, without further damage. Friedman, and Keating closed the gap with a goal each but the clock ran out on USA's comeback, allowing Singapore the first to claim the inaugural USA vs. Singapore perpetual silver trophy cup with a final score of 11 to 8.

Jeffery Pogash, champagne expert, made a special presentaiton at this week's Vueve Cliquot Champagne Toast and Trophy presentation, demonstrating the art of Sabrage. Alex and Ani's Suzanne Kelly, Interim President and Activing Cousel, presented the victorious Singapore team with its prizes.  A posh party and festive tent with decorations, shone through the overcast and drizzle that follwed the match.

Prizes were also awarded for the best tailgate, from Hangar 1 Vodka and the Newport International Boat Show. The door prize $100 Gift Card from Massage Envy went to a luck winner from Middletown, RI.mer

The Singapore team enjoyed the hospitality and amenties of their official team headquarters at one of Newport's true gems, Pearls Boutique Hotels, sailing with America's Cup Charter, paddle boarding - courtesy of Island Surf & Skate, tennis at the International Tennis Hall of Fame, helicopter tours with Birds Eye View Helicoptour Tours, Newport mansion tours and a team dinner at the one and only Clarke Cooke House for a truly memorable visit to the City by the Sea.