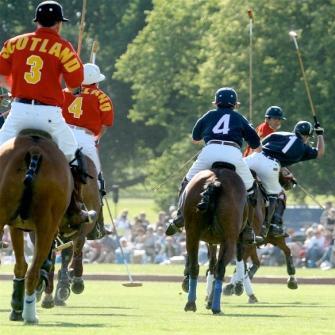 Fans enthusiastically dismissed the authentic Scottish gloomy mist and cool temperatures on Saturday, June 20, to witness USA log a new chapter to its rivalry against their Scottish foes. The venue was filled with kilt-clad fans from throughout the region waving 'the Saltire' St. Andrews cross in lively support as their fellow countrymen leveled the score in a last minute break away, leaving USA to defend their title in a penalty shoot-out, for Scotland's 12th appearance in the Newport International Polo Series, Presented by your Rhode Island BMW Centers.

The teams presented a 'family affair' for Father's Day weekend at the International Polo Grounds as Jeff Swanson returned from Scotland to play with son Alex Swanson, along with brothers Ed and Giles Bromley-Martin. Representing team USA was father-daughter duo Dan and Minnie Keating, Dave Bullis, and Jim DeAngelis.

Team USA put the odds in their favor as DeAngelis rounded two points in the first chukker, while Scotland failed to answer. DeAngelis made another two goals during the second chukker, but J. Swanson was able to slip in through a crease and tally a goal for Scotland before the bell. The Bromley-Martin brothers both made moves scoring a goal for Scotland and closing the gap in the third chukker. But, USA held strong as Bullis and DeAngelis also scored in the third, landing USA ahead with a score of 6 to 3 at half-time.

Scotland regrouped during the break, coming back with a goal in the fourth chukker by J. Swanson, and three more goals in the fifth chukker by E. Bromley-Martin (2) and G. Bromley-Martin (1), bringing Scotland to a one point lead. DeAngelis was able to muster a goal for USA in the fifth, bringing the score to a dead tie of 7 to 7. The sixth chukker wasn’t for the faint of heart as DeAngelis pushed USA two goals closer to the victorious title, only to have G. Bromley-Martin stun the crowd with two goals for Scotland, with a little help from A. Swanson on a break away in the last seven seconds. The final chukker ended in a 9 to 9 draw, evoking a decision by the umpires to determine a winner by a penalty shoot-out from the forty-yard line to break the deadlock. With J. Swanson missing the first penalty shot, the remaining players fro each team succeeded in scoring, with DeAngelis making the fourth and final swing for USA, claiming the winning title for the second year in a row.

A regular attendee's entry was drawn and awarded the weekly door prize from Rockport, and a prize was presented for the Best Tailgate, sponsored by our friends at Stella Artois.  The 2-hour match concluded with the Veuve Clicquot Champagne Toast & Trophy Presentation of the inaugural USA vs. Scotland silver perpetual cup, naming of the Best Playing Pony, autograph signing and cocktail hour to mingle with the players.

During their visit, the Scottish team enjoyed paddle boarding - courtesy of Island Surf & Skate, and a team dinner at the one and only Clarke Cooke House for a truly memorable visit to the City by the Sea.

For highlights or full-length videos of the match, visit our Youtube Channel.  For photo albums, please visit our FB fan page, or the web pages of our photographers: Matthew J Atanian; Rod Harris; and Dana Bibeault.

Discover Polo!  Watch it, Play it, Support it. Newport Polo hosts the Newport International Polo Series XXIV, and is the home of America's first polo club, est. in 1876, (a founding member of the United States Polo Association offering public exhibition matches, polo club member services for grass & arena polo, and polo instruction year-round.  Information about Newport Polo's spectator events, polo lessons, and sponsorship can be found on these web pages, using the links at the top of this page, including About Newport Polo.