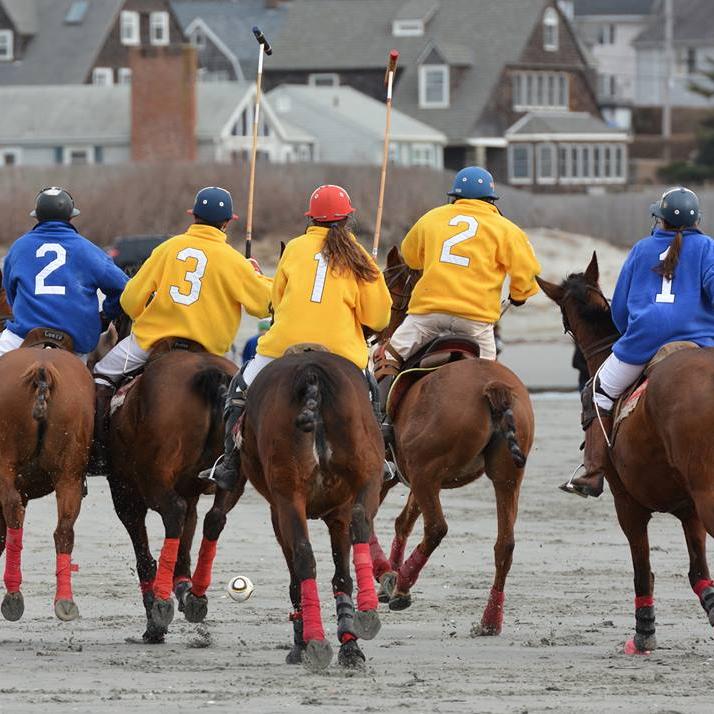 The first throw-in of 2016 took place on the sands of Newport’s Easton’s Beach for the 5th annual Beach Polo exhibition in the Newport Winter Festival.  This year, a spring-like change in weather brought out the largest audience to date for polo matches on each day, over the Feb. 20-21 weekend, to witness exciting polo competition in a beautiful setting on one of prettiest beaches in the east, with huge crashing surf in the backdrop.

Hosted by Newport Polo, Day 1 renewed an old rivalry between the Newport team and Boston, for a very closely contested 4 chukker match. Representing Newport in blue were Stefanie Boyer at #1, Sam Clemens at #2, and Dan Keating at #3. In yellow for Boston, were Thamer Al Dabous at #1, Margeaux Buchanan at #2, and team captain Mark Tashjian at #3.  Scoring in the opening period went back and forth, with Newport taking a narrow 3-2 lead with three goals between Keating and Clemens, and Boston’s two from Al Dabous and Tashjian. Buchannan and Tashjian found the equalizer in the second chukker with three goals to Newport’s two, tying the match at 5 all.  Boyer and Clemens pressured Boston in the third chukker with three more goals to Al Dabous and Tashkian’s two.  Clemens broke it open with four goals in the final chukker, ending the match in a 12 to 8 victory for Newport.

Day 2 pitted two teams from Newport.  Wearing blue were Laurel Howe at #1, Carlos Silvera at #2, and Dan Keating at #3. Wearing yellow were Stefanie Boyer at #1, Brian McCormick at #2, and Sam Clemens in the #3 position.  Keating opened the scoring for blue with two goals, answered by Clemens with one goal in regular play and a penalty conversion for a 2-2 tie. Blue surged ahead in the second chukker with another two goals by Keating, doubling the score 4 to 2.  The blue team picked up their pace in the 3rd chukker raising the score to 7 while Clemens scored another point for yellow, ending the chukker 7 to 3. A late rally in the fourth period, including critical defensive saves and three goals between McCormick and Clemens, brought the Yellow team within on point of Blue. The final buzzer signaling the end of the match denied Yellow an attempted tying goal, letting Blue run out the winner with a final score of 7 to 6.

A thousand or more spectators lined the perimeter of the playing area and sprawled out on the sand to enjoy the exhibition matches.  At the end of Sunday’s match, the players rode around the perimeter, slapping outstretched hands of the audience.  Mild temperatures in the 50’s made and hazy skies made for pleasant February afternoons at the beach.  Children played in the sand, dogs enjoyed the open space and much socializing ensued among those gathered.

The 25th anniversary season of the Newport International Polo Series begins on June 4th as USA takes on international challenger Mexico on Opening Day. Tickets are on sale starting on March 15 to witness the milestone season. Season highlights include 8 international visiting teams with the debut of Morocco, a host of Après Polo events, and the 16th annual International Polo Charity Ball on Friday, August 5th.

Stay up to date with all the Polo Series happenings through private subscription to our monthly lifestyle E-magazine.