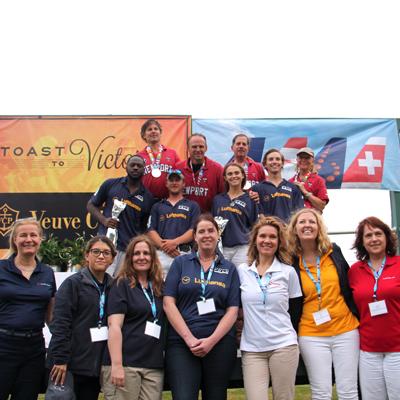 The flags flew high over the Newport International Polo Series XXV, on June 11, 2016 for the Lufthansa Cup, starring the youngest members of the Newport Polo Club representing Lufthansa in navy, playing against the old guard representing Newport in red. Each team fought hard in the classic 6-chukker match. However, Newport proved skill and experience drive victory!

The young and agile Shore of Lufthansa scored the opening goal of the Lufthansa Cup. M. Keating was quickly onto it with the 2nd goal for Lufthansa. C. Bullis then went forward and hit the ball for another goal. D. Bullis was the first to score for Newport, bringing the score 1-3 in the second chukker. Lufthansa took over the ball in the third chucker with a goal from C. Bullis. C. Bullis put the ball through to M. Keating who then shot the fifth goal for Lufthansa. However, D. Bullis made a comeback with a goal for Newport at the half for a score 2-5.

D. Bullis put in the first goal of the second half for Newport, but C. Bullis and M. Keating flew through the field with a goal each. D. Keating finished the fourth chukker with an optimistic shot for a score 4-7. D. Keating popped the ball for a second tight angle shot into the goal. The wise of Newport picked up a second wind as Friedman and D. Bullis scored two more points to Lufthansa’s one shot by M. Keating for a score 7-8 in the fifth chukker. Shore made an unbelievable play for a Lufthansa point in the sixth chukker. Newport got back at Lufthansa with a goal by Still, followed by D. Keating, ending the sixth chukker with a tie 9-9.

Each team fought a tough battle in the Sudden Death. Yet, a penalty in favor of Newport ended the score 10-9, with an open goal shot by D. Keating.

After 6 periods of play, the match concluded with the Veuve Vlicquot Champagne Toast & Trophy Presentation where the Lufthansa Cup went to team Newport, presented by Lufthansa Regional Sales Manager, Ann Boykin.  Autograph signing ensued and celebration after the match.

During the match, the door prize drawing of a Puffy Jacket from the Newport Polo Pro Shop was awarded to one lucky attendee, and the Stella Picnic Trunk was awarded to a patriotic party in tailgate space 2.  Lufthansa was the Match Sponsor.  Stella Artois is available on tap at the Twisted Pony Bar.