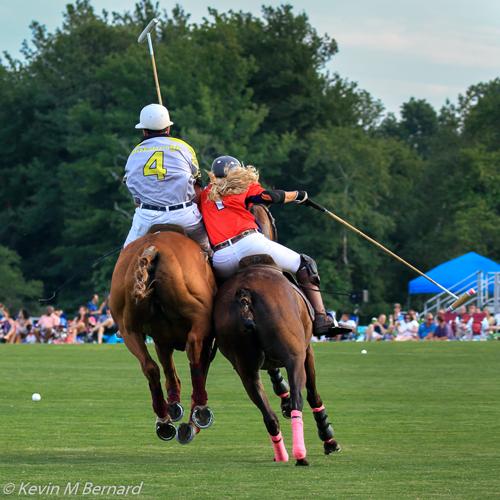 The Newport International Polo Series XXV featured Newport vs. Pittsburgh at 5pm on July 16th. Get additional match info via private email subscription, including a Game day Scorecard (sign up) and the weekly Emagazine (sign up).

Two great American cities dueled it out on the Newport International Polo Field on July 16th to determine once and for all which city was superior.

Playing for Newport in the first spot was Heather Souto, in the second spot was Dan Keating, in the third spot was Dave Bullis and in the fourth spot was Diego Sustatia.

Playing for Pittsburgh in the first spot was Justin P/ Yaz Gronik, in the second spot was Mark Powers, in the third spot was Mike Groubert, and in the fourth spot was Nick Barry.

The first Chukka began with a two goals from Dave Bullis, followed by a pony goal for Newport. The second Chukka Pittsburgh scored two goals (both by Mark Powers) while Newport only scored one (Diego Sustatia).

The third Chukka Newport scored three points again (Keating, Bullis, Diego Sustatia) met by one from Pittsburgh (Gronik). The fourth Chukka, Gronik scored one more point for Pittsburgh, while Souto scored two for Newport. Pittsburgh was going to have to pull out the big guns during the final Chukka to come out of this match victorious. Unfortunately, even though Pittsburgh gave it thier best, they only scored one goal during the final Chukka, a goal that was met by a goal for Newport by Diego S. Sadly for Pittsburgh the score ended five to ten with Newport taking home the victory.

During the match, a weekly door prize drawing and the Best Tailgate were awarded.  The match concluded with the Veuve Clicquot Champagne Toast & Trophy Presentation, as well as an autograph signing and cocktail hour to mingle with the players.