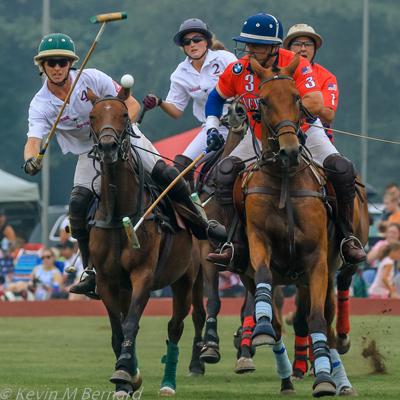 Playing in the autumn classic New England Challenge, Newport’s Senior squad took on the Junior players on Saturday, September 10 in the NBC-10 Newport International Polo Series, presented by the Rhode Island BMW centers.  With only a few short weeks remaining, the teams gave no quarter in the high stakes re-match.

Newport’s skillful seniors on the field were Michel Nseir at #1, Peter Friedman at #2, Jim DeAngelis at #4, and at back, Dan Keating.

Eager to avenge their earlier season loss, playing for the Newport Juniors were Julie DeAangelis at #1, Heather Souto at #2, Charlie Bullis at #3, and splitting the match were Sam Clemens and Jenna Davis at #4.

After a special pre-match concert and playing of the U.S. national anthem by the Navy Band Northeast, the ball was thrown in.  Bullis went immediately on the attack for Newport Juniors, carrying the ball for an easy goal.  Jim DeAngelis tied the match for the Seniors at 1 all before the end of the first chukker.  Nseir gave the Seniors a brief lead to start the second chukker, but Bullis turned the tables for the Juniors with a penalty conversion, followed by another goal during regulation play.  The Juniors padded their lead to end the first half with goals by Davis and Bullis, matched only by a single blistering penalty conversion by Jim DeAngelis for the Seniors.

With 3 chukkers down, and trailing the Juniors 3-5, the Newport Seniors loosened their joints for a comeback chukker.  Jim Deangelis dominated the beginning of chukker 4 with a rapid succession of 3 goals, advancing the Seniors to the lead, 6-5.  Bullis matched wits with Jim DeAngelis, and tied the game at 6 all before the chukker’s end.  Souto lead the fifth chukker for the Juniors, but Keating kept the game tied 7-7 as the teams left the field to change horses for the final round.  Jim DeAngalis opened the sixth chukker with his sixth goal of the game, putting the Seniors in the lead, 8-7.  Bullis leveled the field for the Juniors, and Souto sent them over the edge, beating out the Seniors, 9-8.

During the match, one lucky winner took home $150 gift certificate for a fabulous dining experience in Newport, awarded by Cox.  A finely appointed birthday celebration in tailgate space 32 with plush pillow seating for an evening dinner on the lawn won the Best Tailgate Picnic Trunk from Stella Artois.  Following the match, the Commander J.B.L Leavitt Cup was presented to the teams by representatives from the Clarke Cooke House during the Veuve Clicquot Champagne Toast and Trophy Presentation.