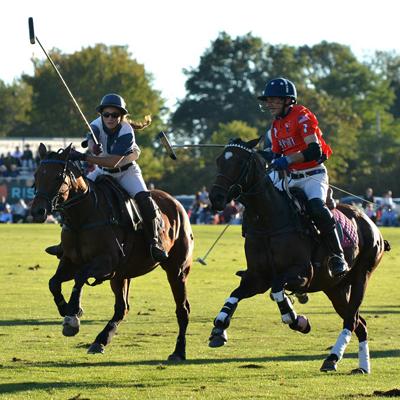 In an end of season face-off, the Newport Masters took on the Newport Juniors in the NBC-10 Newport International Polo Series, presented by the Rhode Island BMW Centers.  Earlier matches in 2016 yielded one win for the Masters, and one win for the Juniors.  The teams battled it out to break the tie for bragging rights ‘till spring.

Playing for Newport Masters was Stephanie Still at #1, Sam Clemens at #2, Peter Friedman in the captain’s position at #3, and at back, Dave Bullis.

Newport Juniors fielded Suleman Iddrissu at #1, Amy Rice at #2, Jenna Davis at #3, and Charlie Bullis at #4.

Experience won out as the game began, with Friedman taking immediate advantage at the throw-in.  He carried the ball for an easy goal, and won the play in the second throw-in for another Masters goal.  C. Bulls was finally able to break past the Masters, winning the first goal for the Juniors.  Iddrissu tied the match at 2-all before the bell.  Agility won out in the start of the second chukker as Davis joined the action, scoring for the Juniors.  But, patience and cunning won the long game as D. Bullis ended the chukker with two goals for a 4-3 Masters’ lead.  The Juniors regained ground at the half, capitalizing on a Masters’ mistake with C. Bullis making a neat penalty conversion to level the score.  Clemens briefly brought the Masters back into the lead, but C. Bullis ended the first half in a 5-all tie.

The Masters’ came back to the field with renewed vigor after half-time.  Clemens won out as the chukker started, making a neat play to score.  C. Bullis briefly tied the match again, but Clemens padded the Masters’ lead with two more goals.  Clemens continued to widen the gap through the fifth chukker, raising the Masters’ score to 9.  C. Bullis made hay on another penalty, bringing the Juniors up to 7, but a goal by Friedman ended the chukker 10-7 in favor of the Masters.  With a comfortable 3 goal lead, the Masters let their defense slip, and two goals from C. Bullis put the Juniors within one point of the Masters.  D. Bullis quickly raised the Masters’ score to 11.  Iddrissu gained another point for the Juniors, but time was not on their side.  Experience won out, with an 11-10 victory giving the Newport Masters bragging rights until 2017.

During the match, one lucky winner took home an official Team Newport jersey in the weekly door prize drawing.  Fun loving tailgaters in space 3 took the Best Tailgate Picnic Trunk from Stella Artois for a festive end of season party with a purple gorilla mascot.  Following the match, the Commander J.B. L. Leavitt Cup was presented to the teams by Chuck Borkoski of Stella Artois, during the Veuve Clicquot Champagne Toast and Trophy Presentation.  The 6-chukker match concluded with a cocktail hour to meet the players.